Shikhar Dhawan and Ishant Sharma will play the first match of Vijay Hazare Trophy 2015-16 against Baroda.

New Delhi:  India‘s Test captain Virat Kohli has decided to take rest while teammates Shikhar Dhawan and Ishant Sharma will be playing for Delhi against Baroda in their opening group league match of the Vijay Hazare Trophy 2015-16, here tomorrow. Delhi’s chief coach Vijay Dahiya confirmed that both Shikhar and Ishant are available for the Baroda game. “Virat is not playing in this game. We had already kept a stand-bye [Vaibhav Rawal]. Shikhar and Ishant trained with the other boys this morning and are available for this game. We do not have any fitness issues either,” Dahiya told PTI, ahead of their match against the Pathan brothers. Vijay Hazare Trophy 2015-16: 10 players to watch out for

Asked if skipper Gautam Gambhir will bat down the order, now that Shikhar will be playing, Dahiya said, “No, Shikhar and Gautam will open the innings. Unmukt [Chand] will come in at No 3.” He was also happy with the pitch but is expecting the white Kookaburra ball to do its bit on a chilly December morning. “With the kind of weather we get in Northern India in December, the ball will certainly do a bit. The pitch seems to be a good one,” Dahiya said. Vijay Hazare Trophy 2015-16: Cheteshwar Pujara, Ravindra Jadeja to play for Saurashtra

The Delhi coach also welcomed the idea of having a zonal format for the tournament, “It’s a nice thing to be playing top teams from the start. I guess all the players are happy with this change of format which gives them an opportunity to test their skills against best from the start. Baroda is a good team with Ambati Rayudu, who is a current India player, both the Pathan brothers and Deepak Hooda. They are a good opposition to face first up.” 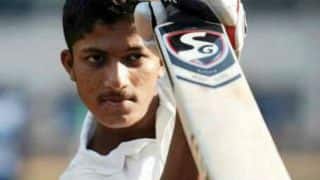