"It's unfortunate that people jump to conclusions quickly."

India faced an embarrassing defeat in the second ODI against England at Lord s, London. India were all out for 236 chasing 323 as they lost by 86 runs allowing the host to level series. Virat Kohli fought hard with his innings of 45 off 56 but sadly could not take India home. It was all to MS Dhoni after that who is known for his finishing skills. He came to bat when India was 140 for 4. He started his innings slow and was expected to make it up for that in the end, but maybe he waited too long for it. He scored 37 off 59 with only 2 fours and a poor strike rate of 62.71 before getting out in the 47th over.

Talking on the same in the presentation ceremony, Kohli questioned the criticism Dhoni faced on social media and defended him.

“This thing comes up again and again when he’s not able to play the way he does,” Kohli said at the post-match presentation ceremony.

“It’s unfortunate that people jump to conclusions quickly. When he does well, people call him the best finisher ever, and when things do not go well, people pounce on him,” the Indian captain seemed trifle irritated with knee jerk reactions from fans and critics alike. The idea was to take the innings deep. He has the experience but sometimes it doesn’t come off. We totally believe in him and the ability of all the players,” he added.

Dhoni will play a key role in the World Cup which is just around the corner with his vast experience and keeping skills. However, his role as a finisher has been in doubt a few times now. Yuzvendra Chahal, who came for the post-match press conference said that there was no message from the dressing room for Dhoni to accelerate.

“I don’t know what was said to him (when he changed bats). After Hardik was dismissed, there were only me, Siddarth Kaul, Umesh Yadav and Kuldeep. So it wasn’t like there were 2-3 specialist batsmen remaining. He hadn’t batted much, so this was a chance to get a knock. If he had hit a shot earlier and got out, we couldn’t have even batted all 50 overs,” Chahal said.

Since the home ODI series against Australia last September, Dhoni has batted 13 times scoring 267 runs with four not outs. The average has been 29.66 which can be put in perspective considering at what time of the innings, he comes into bat.

However the most telling statistic is a strike-rate of 78.07 which is an indication that he is not able to force the pace down the order right at the onset. With the first four spots being fixed and Suresh Raina‘s inclusion, Dhoni is forced to bat very low down the order.

“Had it been 80 in 7 overs and if Hardik would have been around, Dhoni would have still gone for it. But with 120 odd runs and Hardik being dismissed, he knew that chase was out of bounds. We shouldn’t judge a player on the basis of one match,” former India pacer Ashish Nehra said at the post-match TV show.

Kohli on his part felt that it was one bad day and also the fact that England brought forth their A game.

“We started pretty well with the bat. It was a good wicket but got slower. When we lost three wickets in three overs that hurt us. I thought that’s where we fell behind. Credit to the bowlers, they stuck to their guns. Today was a day when we couldn’t get going. 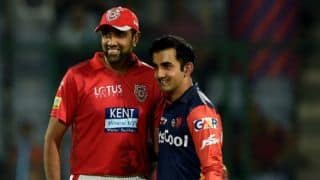