A shorter handle means there is less scope to hold the handle tight which may help the batsman drive along the ground, not in the air.

In a bid to correct his front foot drive, which of late has been the reason for his dismissals, India skipper Virat Kohli on Tuesday was seen using a shorter bat handle while practising at the nets ahead of India’s first cricket Test against Sri Lanka in two days’ time here at the Eden Gardens.

Kohli called for a Cricket Association of Bengal (CAB) staff, moments before hitting the nets, asking him to chop off the top part of his bat handle with coach Ravi Shastri and National Selector Devang Gandhi in tow. Of late, Kohli hasn’t been at ease while driving on the front foot, getting out quite a few times against Australia in the limited-overs series.

A shorter handle means there is less scope to hold the handle tight which may help the batsman drive along the ground, not in the air. In the last five innings in white-ball cricket, Kohli has only one century, a 113 versus New Zealand.

Meanwhile, the grass which was there on the Eden track on Monday seemed to have been removed considerably. Shastri, Ravindra Jadeja and Kohli had a look at the wicket. Former captain and CAB President Sourav Ganguly was also seen near the 22-yard strip as the India players sweated it out in the middle.

Test specialist Cheteshwar Pujara, who did not train on Monday, spent a lot of time at the nets while opener Murali Vijay was also seen bowling to Kohli. The hosts practised for nearly three hours while tourists Sri Lanka also trained earlier in the day. 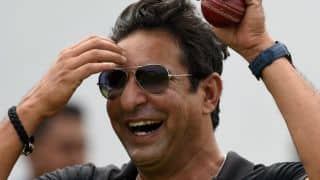