With Hardik Pandya being rested for the Sri Lanka Test series, Vijay Shankar was called as replacement of Bhuvneshwar Kumar for the second Test.

With Pandya being rested for the Sri Lanka Test series, Shankar was called as replacement of Bhuvneshwar Kumar for the second match but Kohli dropped hints that the 26-year-old may be a contender for a slot in the national team for the South African tour, early next year.

“Well, he (Shankar) has been very consistent and has earned his spot. We wanted to have a look at another all- rounder keeping in mind this aspect (batsman who bowls medium pace) of the team going forward,” Kohli said when asked about his take on the Tamil Nadu cricketer.

“Obviously, Hardik is in our scheme of things as first all rounder but we need to find out more people with that kind of ability whom we can groom and make as back ups for all- rounder’s spot when we travel abroad.”

The skipper made it clear that he wants Shankar to get a feel of the Indian team s set-up and know what he needs to do to become a top-notch international player.

“The whole mindset of bringing him and keeping him in the set-up is to make him familiar with what s going on here and so that he understands what all he needs to work on his game as well,” the captain said.

He may not have seen Shankar in match situation beyond a few IPL games but he seemed impressed with his batting ability during the net session and is confident that he can slip in 10-12 overs as the fifth bowler.

“He is a pretty balanced cricketer. Pretty composed, great fielder, handy with the ball and can easily can give you 10-12 overs a day. He is very solid with the bat of what I saw at the nets today. So big moment for him, he has earned it as I said, he added. 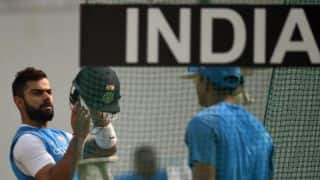