Rishabh Pant expected to be picked in India A squads for the Australia tour but when he was overlooked, it "hurt him".

New Delhi: After the high of Under-19 World Cup and some good knocks in the Indian Premier League (IPL), Rishabh Pant expected to be picked in India A squads for the Australia tour but when he was overlooked, it “hurt him” but also made him determined to pile on a mountain of runs. He also spoke about his favourite idols in cricketing arena with Indian Test skipper among the list along with former Indian and Australian cricketer Virender Sehwag and Adam Gilchrist. Having started Ranji Trophy 2016-17 with a 124-ball-146 and a gigantic 308 off 326 balls, Pant now wants to follow Sunil Gavaskar’s famous theory: “If knocking the door doesn’t help, break it open”. “Yes, I won’t deny that I was very hurt after I didn’t make it to the India A team’s tour of Australia. But then I realised that I have to score plenty of runs. Itna runs banaoon ki koi ignore na kar sake (Score so much runs that no one can ignore me),” Pant told PTI. ALSO READ: Sehwag applauds Rishabh Pant s aggressive triple hundred in Ranji Trophy

With 454 runs from only two games this season at an astounding average of 227 runs, Pant is justifying the billing of being the ‘next big thing in Indian cricket’. So what has been the plan en route his triple hundred, and his reply is like his batting, uncomplicated. “Nothing much. Just to focus on loose deliveries and don’t let go any of them.” But if 300 comes off 320 balls, then you must have hit good deliveries also, he laughs: “Viru bhai ne 294 (293 vs Sri Lanka in 254 balls) kitne balls mein banaye the. How many balls did Viru bhai take to make 293. Viru bhai and Gilchrist are my idols. I also admire Virat bhaiya’s batting.”

He has played only four first-class matches for Delhi since his debut last season and he admits that there has not been any one particular as of now in Delhi dressing room that he has been influenced by. “It is very difficult that you will have anyone having significant influence on you in such a short time. I am very new to first-class cricket,” says Pant. But talk about Delhi’s premier nursery of top cricketers — Sonnet Club and suddenly you could gauge the respect and fondness in Pant’s voice. Sonnet has produced players like Raman Lamba, Ajay Sharma, Atul Wassan, Ashish Nehra over the years under watchful guidance of their coach Tarak Sinha. ALSO READ: Rishab Pant’s triple century for Delhi draws against Maharashtra

“Sonnet is not a club for me. It means everything. The player that I am today, whatever I have achieved is because of Sonnet Club. And when you talk about Tarak Sir, he is not a father figure but just like my father. He has taught me everything. “I must also mention Ashish bhaiya (Nehra). At his age, the way he worked hard and got back into the Indian team was an inspiration for youngsters like me. He has also been a great guide,” said Pant. Quiz him whether he is ready to don the big gloves when Mahendra Singh Dhoni calls time in his illustrious career, Pant said: “You can’t think and put pressure on yourself thinking all these things. But when you start playing serious cricket, it is only obvious that you want to play for India. My dream is no different from others.” 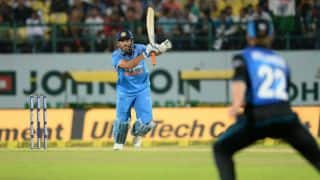