Australian pace bowler Mitchell Johnson revealed the exact moment at which his rivalry with Indian batting superstar Virat Kohli began. Johnson said that the spat began in India’s Test tour to Australia in 2014-15, when Johnson accidentally hit Kohli while trying to run him out. From there both players made comments both on the field and in press conferences, and the feud began. The spat began in the Melbourne Cricket Ground (MCG) Boxing Day Test and continues till date. During the T20 World Cup 2016 Johnson had made a jibe at Kohli’s expense on Twitter, but that tweet backfired as Kohli scored a match-winning half-century to help India knock Australia out of the tournament. READ: Virat Kohli-Mitchell Johnson involved in altercation on Day 3 of 3rd Test in Melbourne

According to cricket.com.au, Johnson said, “We’ve had our differences and most of it stems from the 2014 (MCG) Test, when a ball I threw hit Virat on the body.” Johnson said in his column for Fox Sports, “I was legitimately trying to run him out but he didn’t like what I did. When he made some comment in the media that night about having no respect for me as a player, that’s when I got really annoyed.” READ: Mitchell Johnson’s bouncer to Virat Kohli: Has Cricket changed?

Kohli had said soon after the incident, “I respect quite a few of [the Australian players] but someone who doesn’t respect me I’ve got no reason to respect him. It was going on throughout the day. They were calling me a spoiled brat and I said ‘maybe that’s the way I am, and I know you guys hate me’ and it worked in my favour I guess. I like playing against Australia because it’s very hard for them to stay calm and I don’t mind an argument on the field.” READ: Virat Kohli’s comments on Mitchell Johnson were unnecessary

Johnson went on to write, “Virat is the kind of player you’d want in your team. He’s a real fighter and to be honest he’s a bit like most of us were in the Australian team. We go pretty hard on the field, and he’s got that about him as well. The fact he plays the game like us is probably why we’ve rubbed each other the wrong way. If I sit back and digest it properly, we’re actually quite similar in the way we approach the game. He’s a fiery character and he pushes the boundaries, just like I’ve always tried to do. Maybe that’s why we’ve clashed so often. I can’t wait to come up against him and his Royal Challengers Bangalore teammates later in the IPL.” 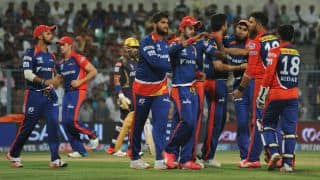