MS Dhoni and his deputy Virat Kohli knit a stand of 151 for the third wicket in 27.1 overs as India completed the chase of 286, winning the third ODI of the series against New Zealand by seven wickets with 10 balls to spare.

Win the toss, bowl first, come out second and finish it off. That has been Indian cricket’s mantra in limited-overs. Why wouldn’t you adopt this ploy when you have two of the greatest batsmen in run-chases donning the captain and vice-captain’s role for you? MS Dhoni and his deputy Virat Kohli knit a stand of 151 for the third wicket in 27.1 overs as India completed the chase of 286, winning the third One-Day International of the series against New Zealand by seven wickets with 10 balls to spare. Kohli brought up his 26th hundred and 16th in run-chases in another contest that headed towards a nail-biter way. With a win at Mohali, India now lead the five-match ODI series 2-1. FULL Cricket Scorecard, India vs New Zealand, 3rd ODI at Mohali

Kohli remained unbeaten on 154 from 134 balls, a knock that consisted 16 fours and one six. Dhoni was dismissed for 80, his first 50-plus score in over a year’s time. The partnership laid the platform for the chase and throughout this they seemed to be in complete control, toying with the good bowling attack led by Trent Boult and Tim Southee. Though there were some unexpected hiccups with ‘callings’, the hallmark of the partnership was running between the wickets, acceleration at will whenever the situation demanded and the maturity these two showed in terms of handling pressure was impeccable. FULL Cricket Updates, India vs New Zealand, 3rd ODI at Mohali

The poor show from Indian openers continued. Ajinkya Rahane failed to seize another opportunity and India were in back foot in the third over when Matt Henry got the better of him. The ball seemed to stop on the batsman but at this level one should be good enough to tackle those. He was early and played it half-heartedly as the ball lobbed to Mitchell Santner at cover. Rohit Sharma departed in the ninth over after his Mumbai Indians teammate Southee foxed him with an off-cutter that seemed more of an off-spin. He did not read it and was struck on the pads in front of middle and leg. The height factor could have gone in Rohit’s favour but Umpire Bruce Oxenford saw it from the bowler’s perspective.

However, in the 34th over, Southee bowled a very similar ball to Kohli, though the pace was slightly on the slower side, Kohli read it early and produced a special stroke, using his bottom hand to whip the fast off-spinner to the deep mid-wicket ropes. That’s how Kohli entered his 80s. When you watch the leather release from the hand closely, that is what you can do. However Kohli was allowed to go this far.

Ross Taylor’s horrendous tour continued. With his 44 today, it seemed to have regained the lost touch but he dropped the game in the fifth over when let go a Kohli catch at wide slip position. The Indian vice-captain looked to glide the Henry ball towards the third-man region when the extra bounce beat him as he edged it straight to Taylor, who failed to grab the regulation catch.

Kohli went on to register his 38th ODI fifty and added 151 for the third wicket with Dhoni as the duo guided India to a win on a very good batting surface at Mohali. In a move that ardent of fans have waited for long, Dhoni promoted himself in the batting order to the No.4 position and went on to craft a brilliant 80 off 91 balls. His intent was clear from ball one. He was aggressive in his play and mixed the dose of caution to it as well. Whenever there was a catch up to play for the required rate, Dhoni wielded the willow that resulted in the massive sixes. He struck three of them.

With the required run rate lurking over six, the first Dhoni maximum came in the 17th over, off Mitchell Santer when he hoisted the left-arm spinner over long-off. That shot got him to 9000 ODI runs. He became the fifth India to this mark and only cricketer to have made that many with an average in excess of 50.

In the 21st over, Santer was at the receiving end once again when he gave Dhoni the chance to free his arms. It did transport us to the good old days of a decade back when the longhaired maverick from Ranchi would terrorise bowlers around the world. Six overs later, Jimmy Neesham was presented the straight bat over his head for another six. With that 83 meter hit, Dhoni registered his 196th six and surpassed Sachin Tendulkar as the Indian player with most sixes in international cricket and joined Sourav Ganguly’s tally of 189 sixes (the most sixes for India).

This Dhoni knock should rest the debate on his batting position. Dhoni has made a strong case for himself in his own court on why he should be batting at No.4.

After Dhoni fell, India did survive some anxious moments as the required run-rate shot above seven and half. Kohli brought up his hundred in the 40th over and along with his 2008 under-19 World Cup teammate Manish Pandey, he went on to complete the chase. Pandey who remained unbeaten on 28, added 97 from 77 balls for the fourth wicket. India needed 23 runs from 3 overs and Boult was bowling. With Kohli on strike, the order of the over went: 4, 2, 4, 6, 2 and 4. With a run needed from next 12 balls, a Pandey boundary sealed it for India.

Earlier, India for the sixth straight time won the toss in this tour and elected to bowl. Dew was going to be a factor and India being good in chases prompted that decision. Martin Guptill got New Zealand off to a good start, which has been a rarity off late. Though Guptill’s brisk start was cut short by a Umesh Yadav’s inswinger, New Zealand still found themselves at driver’s seat at 153 for 2 in the 29th over. Tom Latham crafted his fifth fifty of the tour and Taylor for a change came to the scoring party with a 44.

Amit Mishra went on to outfox Taylor with a leg-spinner’s delight that bamboozled him and he was stumped. Same fate ensued for Luke Ronchi. Dhoni completed his 150th career stumping in the process. However, the surprise package was Kedar Jadhav’s off-spin, who finished with a three-for and among his wickets was the scalp of Kiwi skipper and their best batsman Kane Williamson. Jadhav, who has one wicket in First-Class cricket has already picked six in this series and Dhoni deserves the credit in identifying the off-spinner in the part-time wicketkeeper, who might have not played these three games had Suresh Raina been match-fit.

Jadhav, Mishra and Umesh’ strikes had reduced New Zealand to 199 for 8 in the 38th over when Neesham collaborated with No.10 batsman Henry to ensure the visitors got a good score on the board. Neesham played an innings full of maturity and Henry deserves every bit of accolade for supporting his senior partner. They put a price tag on their wicket, kept the singles going and when the slog overs arrived, they took calculated risks. This is something their middle-order has not done in the entire tour and had they done so today, a total in excess of 320 was a possibility.

The duo added 84 for the ninth wicket to help New Zealand finish with 285 before they were bowled out in 49.4 overs. In process, Neesham got to 57 from 47 balls, his maiden fifty in ODIs. Their valiant effort got the team to a challenging total but unfortunately it was not enough.

Ranchi, Dhoni’s home city, will host the fourth ODI of the series. Another win for India and the series will be pocketed.

(Suvajit Mustafi consumes cricket for lunch, fiction for dinner and munches numerous other snacks throughout the day. Yes, a jack of several trades, all Suvajit dreamt of was being India s World Cup winning skipper but ended up being a sports writer, author, screenwriter, director, copywriter, graphic designer, sportsmarketer , strategist, entrepreneur, philosopher and traveller. Donning so many hats, it s cricket which gives him the ultimate high and where he finds solace. He can be followed at @RibsGully and facebook.com/rivu7) 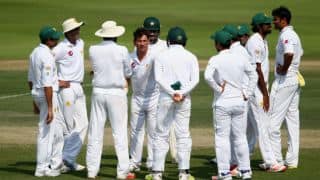 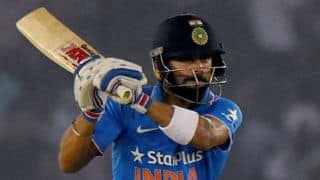