West Indies are hoping a change in their fortunes on their current tour of India through T20Is after losing the preceding Tests and ODI series.

In the absence of regular captain Virat Kohli, who scored three consecutive centuries in the five-match ODI series preceding the T20I series against West Indies, India will not find it easy against the current World T20 champions, reckons batting legend Sunil Gavaskar.

The fact that the last time India beat them in 2014 would also be playing on their minds as they gear up for the three-match series opener in Kolkata on Sunday. West Indies are hoping a change in their fortunes on their current tour of India in which they have been comprehensively beaten in a two-Test (2-0) and a five-match ODI series (3-1).

“India are also without their regular skipper Virat Kohli, and even though they have shown that they can win without him in the Asia Cup and the odd match where he fails to score a hundred, it is a huge psychological plus for the Windies,” Gavaskar wrote in his column for The Times of India on Sunday. “They will hope to put pressure on the Indian batting and hope that early wickets expose the newer Indian batsmen to pressure. India’s players have plenty of experience of the T20 format because of the IPL, but as we have seen in the past, playing for a franchise and playing internationally are two different things altogether,”

India have packed their T20I squad with slow bowlers including the uncapped duo of Krunal Pandya and Shahbaz Nadeem. “India have included plenty of slow bowlers as taking the pace off the ball makes it harder for the big shots to be played but then, power hitters can mishit into the stands too,” Gavaskar observed.

Apart from Kohli, India will also be without MS Dhoni which gives the likes of Rishabh Pant and Dinesh Karthik to further their claim in India’s limited-overs setup.

“Mahendra Singh Dhoni is also not in the Indian team and this is a great opportunity for Rishab Pant and Dinesh Karthik to try and cement a place in the team for the foreseeable future. Both have top records in the IPL and will be keen to replicate that form for India too. Then there is Krunal Pandya who also has shown he is a street smart player who relishes a fight,” he wrote. 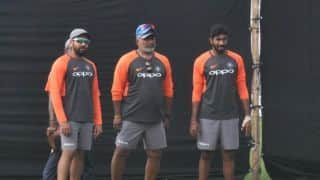 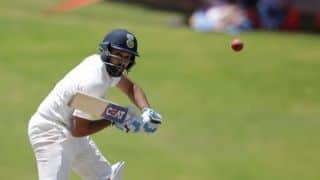