Time and again Indian skipper Virat Kohli has proved his worth in the side with his consistence and phenomenal performance on field. Same was the case in the just concluded ODI series against visitors New Zealand, as Kohli once again proved his dominance in the side, especially with the bat. He continues to break records and achieve new milestones in almost every single game he plays. Owing to this very consistent performance of his, former Indian skipper Sunil Gavaskar has praised the current skipper’s role in the side. He also termed him as ‘phenomenal’, as he feels Kohli is a quick learner from his mistakes. Rahul Dravid backs Virat Kohli s on-field aggressiveness

On Kohli’s consistency: Virat s consistency with the bat is beyond phenomenal. Against New Zealand, there was no question of him being denied a hundred. He got denied against the Australians but remember he learnt from that. He was not trying to run the ball to third man [against New Zealand], like he got out against the Australians in two of the five matches, Gavaskar was quoted as saying by NDTV. India vs New Zealand, 2017 ODI series: Marks out of 10 for Virat Kohli and co.

Key to Virat Kohli s consistency is that he learns from his mistakes and to then avoid those. That is what Virat keeps on doing. There will be some same dismissals because that s what cricket is all about but if you have made a mistake and you try to avoid it. The bowlers will get you out because they will bowl you the odd good ball, that is accepted. But the thing that he learns from errors and avoids them, that is why he is so consistent. 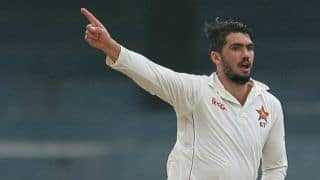