Virat Kohli scored 159 from five matches in his ODI debut series, with a highest score of 54.

As India geared for the second Test against Sri Lanka at Colombo, Virat Kohli’s fans celebrated the cricketers seven years of international cricket. Fans trended #7YearsofViratinICT  on Twitter. On August 18, 2008, Kohli made his One-Day International (ODI) debut against Sri Lanka at Dambulla. Kohli did not end up with a big score and Sri Lanka won the match by eight wickets. However, the then 20-year-old went on to become the fourth highest run-scorer in the series, which saw India win 3-2. Kohli scored 159 from five matches, with a highest score of 54. He ended with an average of 31.80. Since then, Kohli has played 161 ODIs, 35 Tests and 28 Twenty20 Internationals (T20Is) till now.

congratulations @imVkohli for 7 Years of Virat in ICT . and I prey to god for your healthy and long life.we proud of you

7 Years of Virat in ICT His dedication. His Confidence.. His Attitude ❤️ @imVkohli pic.twitter.com/KuBiTYBzCN

22 ODI Tons 11 Test Tons Total of 10,225 runs Remarkable success in the league & domestic circuit All in just 7 yrs 7 Years of Virat in ICT

Cricket historian Arunabha Sengupta writes, “In his formative years, dating back to when he led India to the Under-19 World Cup triumph, Virat Kohli was a superbrat — brash, volatile and insanely talented. As he transformed into a superstar of the cricketing world, the many bristles that used to rub people the wrong way were reduced to a few. With technique and temperament to succeed in every condition and format, Kohli cutting loose is one of the exalted sights of the modern game — be it for India, Delhi or Royal Challengers Bangalore. He is already at the rarefied top of the ODI and T20 formats, while taking continuously improving strides to get there in Test cricket as well. His style is based on the sound fundamentals of batting, topped with the finishing flair of god-gifted genius. The grand and glittering strokes are essayed all around the ground, in a fascinating cocktail of graceful dominance and silken brutality, often in a spate of successive strikes that belie imagination and credulity. Not many have his ability to change shots at the last possible moment, even fewer can execute the slog-flick with such perfect nonchalance.” 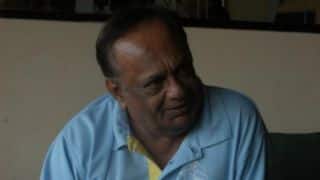