Virat Kohli represented Team India to request to BCCI for a pay hike and they get the initial approval from Committee of Administrators (CoA).

Virat Kohli represented Team India to request to BCCI for a pay hike and they have got the initial approval from Committee of Administrators (CoA). Reports suggest that BCCI are trying to increase the salary of senior Indian team by 100 per cent while the domestic and junior teams will also be benefit from the new scheme. Currently, BCCI spends INR 180 crore for paying its players and the board is trying to incorporate INR 200 crore more to that.

A CoA source told Times of India, “Senior cricketers are certainly going to get a 100% raise and even domestic players would get the same percentage increase. Since, these cricketers are the reason for BCCI’s revenues, can’t the board afford another Rs 200 crore for their salaries?”

However, BCCI will have little effect on the revenue it generates. “Because of the sheer bulk of the money, the senior Indian cricketers can’t be given half of the projected 26% revenue of BCCI. It would be distributed in such a way that domestic cricketers also get big hikes,” the source added.

Currently, BCCI pays INR 2 crore to their Grade A players which includes the likes of Virat Kohli, MS Dhoni among others while the likes of Rohit Sharma, Ajinkya Rahane are in Grade B, earning INR 1 crore per annum. Shikhar Dhawan, Hardik Pandya belong to Grade C and are paid INR 50 lakh. If the request is approved, the salaries will be doubled. 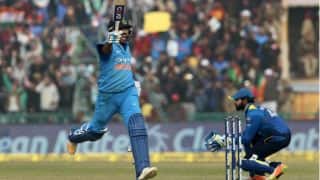