A disenchanted West Indies allowed Indian batsmen to make merry as the hosts posted a mammoth in the fourth One-Day International at Dharamsala on Friday. Virat Kohli (127) continued his fluent touch with his 20th ODI ton along with Suresh Raina who smashed a 58-ball 71. While the Indians put up a stellar performance, the West Indians are going through the motions with the rest of the tour already called off.

Last time around India played here, they were tormented by the England pacers and lost half their side with less than 80 on board. They were once again put in to bat by West Indies. Once again there was a bit of drama at the toss. Earlier, the players had threatened to go on strike over the dispute with players’ association. However, Dwayne Bravo turned up for the toss with the entire team standing behind him as a mark of support. In hindsight, maybe the decision to withdraw was already finalised. Both teams made one change bringing Jason Holder for Ravi Rampaul, while India brought in Akshar Patel for leggie Amit Mishra.

There was some assistance for the pacers early on. Ajinkya Rahane looked in sublime touch right from the first ball but Shikhar Dhawan was made to sweat for a while before the runs started flowing. Holder and Jerome Taylor allowed the good start to slip away halfway after the first powerplay. But in a space of two overs, the complexion of the match changed as India hammered 31 runs in 12 balls with Dhawan scoring 27 off it. From thereon, the short balls continued and the openers breathed easy.

Just when they looked to make merry, Dhawan plotted his own downfall, yet again to a short ball. The mistimed pull landed safely in to the hands of Darren Bravo. Russell could’ve had his second wicket when Rahane pulled towards deep fine-leg and Taylor running towards the catch messed it up. The opener was on 38 then. With his deft touch and quick running between the wickets, Rahane completed his seventh ODI fifty.

After a half-century in the previous match, Kohli was back at his usual No 3 position and stitched a partnership with Rahane. The pitch had eased up considerably and the batsmen were going for their shots at will.

It was the introduction of Suleimann Benn which slowed things down. Benn got good turn and bounce initially and then the ball started gripping a bit making scoring difficult. Both the batsmen made it up with sharp singles. Benn finally got the better of Rahane dismissing him leg-before.

Off the field, news slowly started trickling in about the West Indies Cricket Board’s decision to withdraw from the tour. On the field, West indies were being hammered to all parts of the ground by Suresh Raina and Kohli. The fielders hardly looked focussed on the match while the Indians accumulated runs in boundaries.

However, not to take any credit away from Kohli as the right-hander started cautiously and slowly came to his true colours. The bottom-handed punch, flicks and lofted shots were in full display. This is Kohli’s 20th ODI century. The century against Bangladesh at Fatullah was his last ton in any form of the game.

West Indies’s disinterest can be confirmed by the fact that there were four dropped catches, all of them sitters and overthrows resulting in a few runs including one that fetched Kohli his 100th run.

It would be interesting to see how West Indies go through with this mammoth chase. If the first innings is anything to go by, it wouldn’t come as a surprise if they cave in going for an all-out attack. 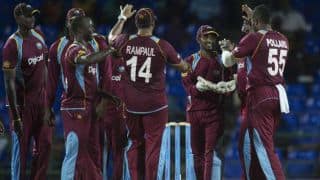