Kohli was upbeat as he made the day of a little girl fan who was waiting to get a glimpse of him. India captain Virat Kohli once again proved why he is the king of hearts with his latest gesture at Indore after India thrashed Bangladesh by an innings and 130 runs in the first Test to take a 1-0 unassailable lead on Saturday. Understandably, after the emphatic win, Kohli was upbeat as he made the day of a little girl fan who was waiting to get a glimpse of him.

When Kohli finally met the fan, he gave her an autograph on a cap she had brought before getting clicked. The moment would have made the fan’s day as she kept smiling in what looked like the dressing-room. This is not the first time Kohli is winning hearts off-the-field.

With the win, Kohli pipped Mahendra Singh Dhoni‘s record of most innings victories as a result. Kohli now has 10 innings victories, while Dhoni had registered 9 as India captain. Mohammed Azharuddin has 8 innings wins followed by Sourav Ganguly with 7.

The recent win in Indore, which also took India’s tally in the ICC World Test Championship points table to 300, saw Kohli equal former Australia skipper Allan Border’s tally of 32 Test wins and is now joint-fourth on the list of captains with most victories in the longest format.

Former South Africa captain Graeme Smith leads the list with 53 wins from 109 matches. Ricky Ponting is second with 48 wins in 77 matches while Steve Waugh is third with 41 wins in 57 matches. 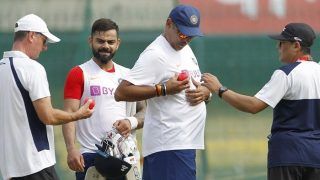 India vs Bangladesh 2019: To Prepare For Day-Night Test in Kolkata, India Stay Put In Indore To Train Under Lights 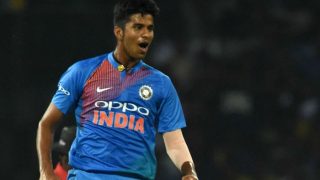 Dream11 Team Prediction TN vs VID: Captain And Vice Captain For Today Group B, Round 7, Syed Mushtaq Ali Trophy 2019 Between Tamil Nadu vs Vidarbha at Greenfield Stadium in Thiruvananthapuram 9:30 AM IST November 17