Virender Sehwag announces arrival in Test cricket with a ton

Virender Sehwag announces arrival in Test cricket with a ton

Sehwag started as a middle-order batsman and when he walked out to the Test arena for the first time he batted at No. 6.

When Virender Sehwag announced his retirement last month, many cricket fans around the world were left heartbroken. Why not? Sehwag went on to redefine batting and is regarded as the greatest opening batsman in the 21st century. However, when he started he was a middle-order batsman and when he walked out to the Test arena for the first time he batted at No. 6. Twitter reactions: Virender Sehwag retires from international cricket and IPL

On this day, in 2001, Sehwag made his Test debut. Against a strong South African side at Bloemfontein, he walked out to bat at 68 for 4, after Jacques Kallis dismissed the then Indian captain Sourav Ganguly. With India in all sorts of trouble, Sehwag and his idol Sachin Tendulkar then went on to weave in a 220-run stand for the fifth wicket. In the process he brought up his maiden Test hundred and that too on debut. Sehwag scored 105 from 173-balls, striking 19 boundaries. The South African bowling attack comprised of Shaun Pollock, Nantie Hayward, Kallis, Makhaya Ntini, Lance Klusener and Nicky Boje.

The match is best remembered for Tendulkar’s 155 in that innings, which saw him playing some breath-taking strokes on square of the wicket. Sehwag got a quick-fire 31 in the second innings and India lost the Test by nine wickets. 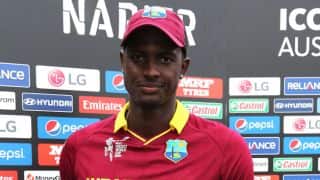