Sehwag, who recently become famous for his hilarious one-liners, has played under Bangar's coaching for Kings XI Punjab (KXIP) in the IPL.

After making comeback to commentary box, Virender Sehwag is back with his hillarious birthday wish and this time he did it for current India batting coach Sanjay Bangar, who is among the rare group of successful coaches who did not have much success in international cricket. Bangar’s international career was quite short as he got to play only 12 Tests and 15 One-Day Internationals (ODIs) for India. He was also part of the first season of Indian Premier League (IPL) as a player not coach and represented Deccan Chargers Hyderabad. Bangar also played for Kolkata Knight Riders (KKR) in IPL 2009 and announced his retirement from all forms of cricket in 2013.

From there on, Bangar began his coaching career by taking the job of batting coach for Kochi Tuskers Kerala (KTK) in IPL 2010. He became India’s batting coach for the first time in August 2014 and also played the role of head coach for the Indian side in their Zimbabwe tour of 2016. Famous for his 68-run knock against England at Headingley in 2002, Bangar turned 44 today and on this special day, his former teammate from India wish him with a special one-liner. Sehwag, who recently become famous for his hilarious one-liners, has played under Bangar’s coaching for Kings XI Punjab (KXIP) in the IPL.This is Sehwag’s first birthday wish tweet after he did for Zaheer Khan on the latter’s birthday.

Sehwag’s witty way of wishing cricketers has been very much appreciated by the fans. One can expect such tweets from Sehwag to keep coming, as he continues to make his fans happy. 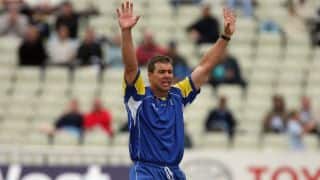