Punjab are at 92 for four against Delhi after nine overs in the IPL 2014.

Kings XI Punjab (KXIP) are at 92 for four against Delhi Daredevils (DD) after nine overs in the Indian Premier League (IPL) 2014. David Miller is batting on one. Manan Vohra was dismissed for 42 by Imran Tahir. Virender Sehwag was out for 23 to hand JP Duminy a wicket. Glenn Maxwell was then bowled by Tahir for 14 runs. Punjab are chasing a 165-run target. This is Match 45 of IPL 2014. Punjab captain George Bailey won the toss and elected to field. This is Match 45 of IPL 2014.

Vohra could not get to his half-century as he hit one from Imran Tahir straight to Murali Vijay at long-off. He was out for 42 off 19 deliveries with four fours and three sixes. Glen Maxwell was the next batsman in and he survived a LBW appeal before getting off the mark with a six over deep mid-wicket.

Sehwag then got in on the act as he reached out and creamed a wide delivery from JP Duminy over deep cover for his first six. He tried to repeat the same shot to a similar delivery, but mistimed the ball to Manoj Tiwary in the deep. Sehwag was out for 23 off 22 deliveries with two fours and one six. Then Tahir sent shockwaves through the Punjab’s fans as he bowled Maxwell for 14 runs on the last delivery of the ninth over. 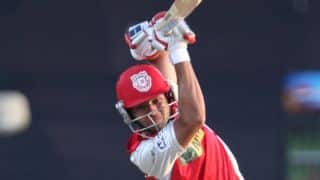