Ever since the trailer of Sachin Tendulkar s biographical documentary film Sachin: A Billion Dreams came out on April 13, it has garnered positive reviews from all quarters. In fact, the rave reviews have not yet stopped coming, with Virender Sehwag, Tendulkar s prot g and long-time team-mate, becoming the latest to join the fan club. Sehwag praised the trailer through his official Twitter handle on Saturday, writing: Batsman Returns,the greatest of them all at a theatre near u.Looking forward to it @sachin_rt Paaji #SachinTrailer (sic). The master blaster praised Sehwag s magical tweets in return. The movie is set to hit the silver screen on May 26, 2017. ALSO READ: Watch Sachin: A Billion Dreams trailer

It all started with Sehwag s tweet, as the Kings XI Punjab (KXIP) Head of Cricket Operations wrote this on his Twitter handle:

In reply, Tendulkar praised Sehwag s tweets, calling them as magical as his batting:

Both Tendulkar and Sehwag two names that cricket fans idolise around the globe have a massive presence on the social media. Both share a terrific record together in ODIs in 114 innings they have scored 4,387 runs in partnerships seventh highest in ODI history. Sehwag and Tendulkar s partnership includes 13 100-plus stands and 18 50-plus stands. Their highest stand is of 182 for the first wicket.

For now, Sehwag is busy with the ongoing edition of Indian Premier League (IPL), where he is marshalling the KXIP troupes from behind the scenes. Tendulkar, meanwhile, continues to associate himself with various social causes and at the same time, awaits his film s release on May 26 this year. 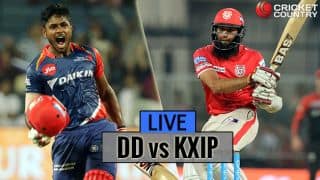