Former Indian dashing opener Virender Sehwag on Thursday rued the fact that he did not score 400 runs in a Test innings.

Former Indian dashing opener Virender Sehwag on Thursday rued the fact that he did not score 400 runs in a Test innings during his glittering career. Sehwag said on the sidelines of the ongoing fourth and final Test between India and South Africa that he would have liked to breach the 400-run mark for an Indian batsman in Test cricket. Sehwag was also felicitated by the country’s cricket board, Board of Control for Cricket in India (BCCI) after he had announced retirement from international cricket with immediate effect in October this year. He had done so to make necessary arrangements to take part on the Cricket All Stars League 2015 which was played in the US last month. ALSO READ — VVS Laxman: Virender Sehwag — a Heart of Gold, caring and giving

Talking to cricket commentator Harsha Bhogle on the sidelines of the final Test in the ongoing Gandi-Mandela Series 2015, Sehwag was asked what more could he have done in his fabulous career. Sehwag, straight forward as always, replied with a grin, “Regret that I did not score 400.” ALSO READ: Virender Sehwag felicitated by BCCI ahead of India vs South Africa 2015, 4th Test at Delhi

Sehwag retired from all formats after he signed up for the Cricket All Stars League that was organised in the US by cricket legends Sachin Tendulkar and Shane Warner. Sehwag, who holds the three highest scores for India in Test cricket — 319, 309 and 293 — last played an international match in March 2013, against Australia. ALSO READ: Why Virender Sehwag is wrong for regretting not getting a farewell game

Sehwag played 104 Tests, 251 One-Day Internationals (ODIs) and 19 Twenty20 Internationals (T20Is) for India after making his international debut in November 2001 against South Africa, at Bloemfontein. Sehwag scored 8,586 runs in Tests whereas 8,273 runs in ODIs. 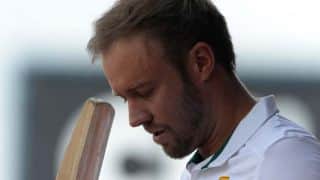 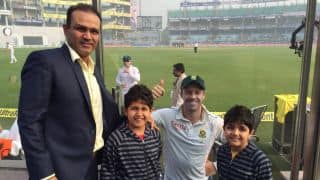