Set to complete a century of Test appearances, Indian opener Virender Sehwag today drew lavish praise from his skipper Mahendra Singh Dhoni, who said the aggressive batsman has a distinct mindset which keeps him positive even during lean patches. 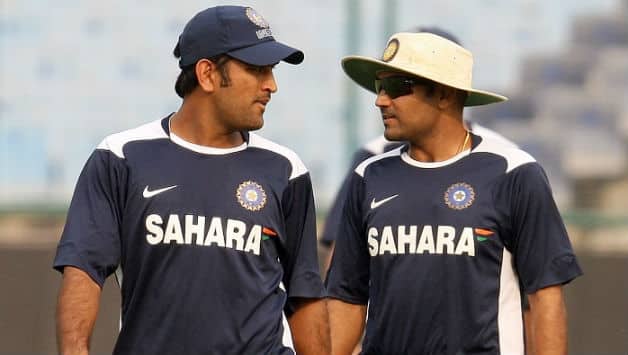 Set to complete a century of Test appearances, Indian opener Virender Sehwag today drew lavish praise from his skipper Mahendra Singh Dhoni, who said the aggressive batsman has a distinct mindset which keeps him positive even during lean patches.

Sehwag would be making his 100th Test appearance when he takes the field against England here Friday in the second game of the ongoing four-match series.

“The crucial decision that he made in his career was when he decided that he will open the innings. I think that was a big challenge for him but he accepted it. His stats are one of the best stats that you can see. He is someone who is very different to a lot of individuals. His thinking is entirely different,” Dhoni said at the pre-match press conference here today.

“How he takes up or faces a particular kind of challenge is very different.”

The 34-year-old Sehwag is on the verge of becoming only the ninth Indian player to reach the 100-Test club list, which his idol Sachin Tendulkar tops with 191 under his belt.

“We have seen once the batsmen get after the bowlers and if they score a few boundaries off the bowler, then it is very difficult for them to get back into the game,” he added.

Dhoni said Sehwag is always full of positive energy irrespective of his form with the bat.

“When you talk about the mindset, that is why he is so special. Whether he is in form or not in form, it does not really bother him. He just keeps thinking positive. He was working a lot on his batting but still his approach remained the same,” said Dhoni.

“His (Sehwag’s) role is very crucial, not to forget the experience that he has got playing in all the formats and also the fact that he still can get us a few wickets. We have not been using him too much in the bowling department but is still someone who can get us a few breakthroughs,” said Dhoni.

The India captain said the way Sehwag plays, it is always easy for him to strike form after a lean phase.

“I don’t think it is too difficult for someone like him to come back to form. We all know that form is about 15 runs here and there. All of a sudden from a very good run, you get out in 15 deliveries. It’s the mindset that helps you get back in the game and that way, I think he is brilliant,” he said.

“When it comes to Viru, you need a bit more time to understand him. All the players who have played with him and shared the dressing room with realise the fact that his mindset is completely different from maybe all the cricketers around the world,” the skipper said.

“He is very positive and he backs his stint and looks forward to score runs. It doesn’t matter whether the wicket is seaming or turning or doing anything. He goes in with one purpose and that is to score runs,” he explained.