Virender Sehwag making a comeback from injury has not helped Delhi Daredevils one bit in their disastrous Indian Premier League campaign and skipper Mahela Jayawardene feels that having the senior opener back in the side does not put an end to all their problems. 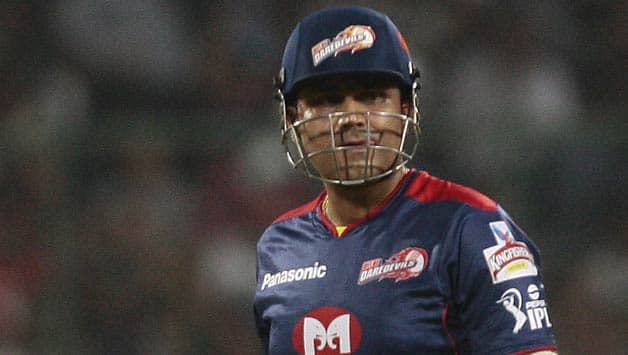 Virender Sehwag made a comeback from injury against Sunrisers Hyderabad © IANS

Virender Sehwag making a comeback from injury has not helped Delhi Daredevils one bit in their disastrous Indian Premier League campaign and skipper Mahela Jayawardene feels that having the senior opener back in the side does not put an end to all their problems.

“It’s not just about Viru. Just having Viru does not really solve our problem. As a batting unit, we need to score runs and be more consistent. Out of the six games, the one in Mumbai and the match against CSK have been two bad games. We should have at least won two matches by now,” Jayawardene said, trying to put up a brave front after his team was shot out for 83 against CSK to lose the match by 86 runs.

Daredevils’ chance of a recovery is gone for all practical reasons but Jayawardene was not ready to throw in the towel as yet and wants his boys to show more determination.

“If we don’t believe that we can qualify, then we should not be playing in the first place. I still believe we can get to six points and then suddenly force ourselves somewhere in the middle of the table. We have to believe in our abilities.

If we have got ourselves in this situation, it’s up to us to pull ourselves out of trouble,” Jayawardene said in defence of his team, though the answer was far from convincing.

About the margin of defeat, the skipper said, “I thought 160 was a par-score on this track considering the batting line-up CSK had. But we lost a lot of wickets upfront and it became difficult. We bowled well for a while before MS [Dhoni] came in. But our plans did not work while batting. Also they bowled and fielded well and kept up the pressure on us.”

Questions have been raised about the quality of domestic talent in the Delhi set-up but Jayawardene backed the youngsters.

“We have guys like Unmukt who had a good season before IPL and also Manpreet [Juneja] and Kedar [Jadhav] who have batted well. Actually, when we lose, it’s very easy to point fingers at certain things. At the end, it’s about winning matches,” he said.

Paul Reiffel: A fast bowler who bowled had great control over line and length