It was the Chris Gayle show at Mohali, during Kings XI Punjab’s (KXIP) match against Sunrisers Hyderabad (SRH). Gayle’s unbeaten 104* helped KXIP hand SRH their first defeat of Indian Premeir League (IPL) 2018. Gayle broke a lot of records and created much more en route his 21st T20 ton. After being rewarded the Man of the Match award, Gayle spoke about Virender Sehwag’s contribution to IPL by picking him. Gayle said: “Like I said, it’s a new franchise. A lot of people might say that Chris has a lot to prove – he didn’t get selected or picked early in the auction. I think Virender Sehwag has saved IPL by picking me. ”

Talking about KXIP’s last game at Mohali for this season, Gayle said: ” The conditions are always tricky, so adjusting is key. Like I said, I am glad to get a hundred today. Going to miss this wicket.” Gayle also rubbished claims of proving people wrong. He said: “I’m not here to prove it to anyone. I’ve done it all. Been there, done that.”

Gayle will next be seen playing against his former IPL side Kolkata Knight Riders at Eden Gardens. 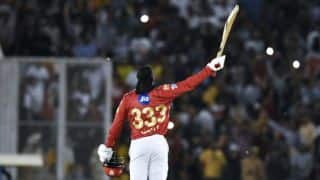 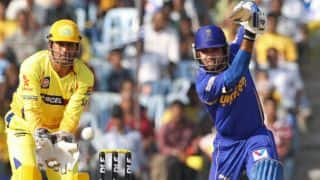