Indian opener Virender Sehwag believes his biggest strength is his self-confidence and belief that he can play well against any opposition. 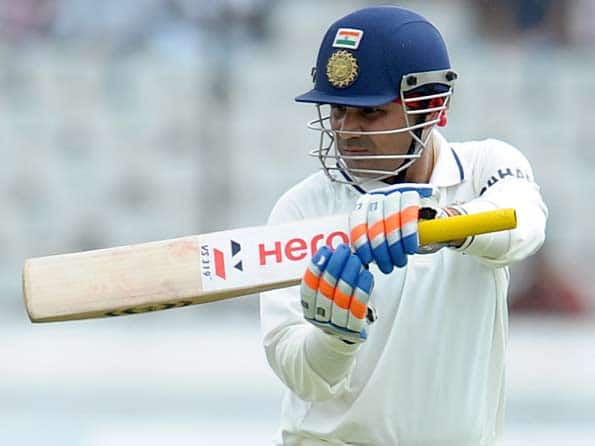 Virender Sehwag believes it is important for a batsman to be happy always, irrespective of what runs he scored. AFP

Indian opener Virender Sehwag believes his biggest strength is his self-confidence and belief that he can play well against any opposition.

“It s the mental strength. I have the self-confidence and the belief that I can play well against any team and score against any bowling attack. International cricket is all about mental toughness. If you re strong in your mind and can control your mind, you can perform against anybody. That s my biggest strength,” Sehwag emphasised.

Sehwag s batting philosophy has always been see the ball and hit the ball.

“If I see the ball, I try to hit it. As a kid, I played a lot of 10-12 over matches. I was a middle-order batsman then. I got to face only 15-16-odd balls and had to make the most of them. Since then my approach has been to score off every ball. That style has stuck with me at the international level as well.”

“Now I m a little more careful about how the wicket is behaving, whether the ball is swinging or not and how the bowling attack is. I give a little more time to myself to understand the conditions and situation well and then plan my innings accordingly.”

“Having said that, if somebody bowls a half-volley on a green top, I ll still go after it and I ll still play my square cuts if the ball is pitched short outside the off-stump. But if a bowler is bowling in good areas, I have to give respect to the new ball rather than the bowler. If I do that and play 10-12 overs with caution, the ball gets old by the time and the bowlers start to get a bit tired. Then, I can take them on,” Sehwag added.

Sehwag believes it is important for a batsman to be happy always, irrespective of what runs he scored.

“The important thing is to be happy, whether you score a zero or a 300. You just go out there and give your best; sometimes you click, sometimes you don t. One should always be happy, irrespective of what you achieve in a match or in life. That s how I live my life. Even if I fail to score in an innings, I keep smiling. I tell myself there will always be a next innings where I can work harder, put in a bit more effort and score runs,” Sehwag was quoted as saying by www.bcci.tv.

Does this mindset help you move on so easily after missing a landmark? When you got out on 293 in the Mumbai Test, everyone was shattered except you.

Sehwag missed on scoring another triple hundred against Sri Lanka at Mumbai. However, despite everyone being shattered about the 33-year-old missing another milestone, Sehwag seem little bothered.

“My parents always told me, you should always be happy in life. It doesn t matter if you have one billion rupees in your bank account or one rupee. This is one life you get and you d rather spend it enjoying whatever you have, rather than thinking, ‘Oh, I should have scored seven more runs or I should get more money. That s my nature and that s what my parents have taught me,” he said.

Sehwag doesn t have problem playing a risky shot and getting dismiseed.

“Most of the times (when) I throw my wicket away, be it a limited-overs game or a Test match, I go over the top trying to hit a four or a six, mistime it and get out. That s my game. As long as my team and the coach are happy with how I play, I don t have any problems with getting out like that.”

Sehwag feels if a player has a strike-rate over 100, he doesn t need to play fancy or unorthodox shots.

“I tried playing the reverse sweep and the slog sweep a couple of times, but I ve never tried to play the switch hit or the scoop. I have to look at my strengths rather than try to do something different. I play a lot of upper cuts to short balls. If you can score at a strike-rate of over 100 by playing proper cricketing shots, why do you need to play those risky shots?”

“Only if the spinner bowls a bit slower and flights the ball, I try the slog sweep. Otherwise, I prefer stepping out and hitting him straight over his head.”

On being asked whom does he finds to be a good hitter, Sehwag replies, “There are a lot of players who re better (hitters) than me. In my team, there s Suresh Raina, Virat Kohli, Rohit Sharma, MS Dhoni, Yuvraj Singh they hit the ball harder than I do. In other teams, there s David Warner, Shane Watson, Kevin Pietersen. In every team there are a couple of such batsmen who can hit long sixes.”

Sehwag finds it more easy opening with Sachin Tendulkar than with Gautam Gambhir, as with the latter, the bowlers target him.

“When I m batting with Sachin Tendulkar, there s very less pressure on me because the opponents are all concentrating on getting him out. With Gautam, the bowlers are worried about getting me out rather than him. Hence I have to be careful. Also, Gautam and I are very good friends, and the communication between us is very good.”

Sehwag believes there is no one who can play the straight drive like Tendulkar does.

On being asked about his view on run-scoring ‘zone , Sehwag said, “No, I ve never been in that zone. I have asked Tendulkar, Dravid and Laxman about it, and they told me when they re in the zone, they know they can score big runs. I could never relate to it. I probably would have been in that space during my big knocks the two triple hundreds and the 293 unknowingly. But I never felt anything different.”

Sehwag believes that every aspiring batsman should possess self-belief.

“He should have the self-belief that he can score runs just by being himself rather than copying someone else. If he s mentally strong, he can bat like me,” Sehwag concluded.