Sehwag's century was complimented well by Manan Vohra and a late cameo by David Miller.

Virender Sehwag‘s vintage hundreds made a comeback in the most stunning fashion to take Kings XI Punjab (KXIP) to a humungous score of 226 for six after MS Dhoni decided to continue to play to Chennai Super Kings‘ (CSK) strengths by electing to field first. All of Chennai’s bowlers were taken apart in a knock that had the Sehwag rubber-stamp on it during his knock of 122 from 57 balls. There were good supporting cameos by Manan Vohra at the top and David Miller  played a blinder towards the end.

Sehwag got the table-toppers to a cracking start with a flick through the leg side and a spank through the covers  which took the score to 10 off the first over. The second over was by the burly Madhya Pradesh pacer Ishwar Pandey and it was an excellent over against the two aggressive batsmen.

Just a single came of the the second over by Ishwar and that set the tone for Chennai pressurizing the opponents through some tight bowling. Even the usually expensive Mohit Sharma didn’t allow any easy runs in the first couple of overs.The last ball of the third over was a bad one and Sehwag dispatched to the boundary ropes and it was there that he started smelling blood.

Vohra was on the front foot at the end of the  third over and Ishwar Pandey’s third over leaked runs in all directions. A short delivery from the pacer saw a full blooded whacking the ball for a six over deep square leg. Then the in-form Sehwag took strike and smashed a deftly cut short to the third man fence. Then the 35-year old lifted the ball over the off-side field for a boundary.

There was no-stopping him after that. He lofted the ball over the infield straight down the ground and then. The next over witnessed absolute carnage from Ashish Nehra’s over. The Delhi battle was a one way street to Najafgarh. Rolling back the years, he went ballistic on the off-side and spanked three consecutive boundaries. MS Dhoni’s men looked clueless and the score  raced over 50 in just the fifth over. The run flow continued with a clever six over the wicket-keeper for another six.

With runs flowing in all directions, MS Dhoni turned to the off-spin of Ravichandran Ashwin to stem the run flow with no avail though. The first ball was smashed straight down the ground and over the long-on fence for a huge six and brought up his fifty a few balls later. There was spin at both ends with the wily  Ravindra Jadeja on the other end. The ball still perished over the boundary ropes with yet another massive hit to clear the long on six. Chennai briefly found some solace after Vohra’s mistimed pull went high in the air and Suresh Raina pouched a safe catch.

Chennai hopes of a comeback was further dashed as carnage shifted another gear and Nehra was for more bashing. Two big sixes straight down the ground left the fielders stranded. One more six came of his blade and yet again it was straight down the ground. Ashwin was the victim and the Wankhede crowd had more ducking to do. A carbon copy of the previous six came in the same over but the Tamil Nadu off-spinner had something to cheer about after Glenn Maxwell’s mistimed heave landed straight to Raina at deep mid-wicket. There was a stylish send-off too from the Chennai lad which Maxwell didn;t take kindly to.

Ashwin though looked tame and Miller also got on the act with a few boundaries of his last over. Sehwag then crawled to his well-deserved hundred that came of 50 balls. The Sehwag show then took a backseat and Miller’s onslaught began to take center-stage and with a consecutive boundaries and a monstrous six over that reached the top tier. Then Sehwag wrested back the momentum from the South African  and murdered Jadeja’s off-spinners in the 17th over. In what was an anti-climax, it was a full-toss from Nehra that dismissed Sehwag. The ball took the toe edge of the bat in what was a slice, trying to clear the deep point fence. Faf du Plessis evaded a collision to take a good diving catch.  George Bailey was bowled off a yorker and Miller departed of a run-out in the last over. 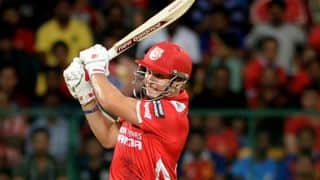 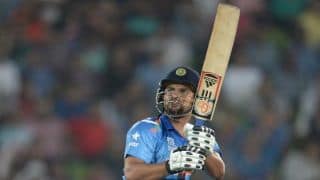