India batsman VVS Laxman, on Saturday announced his retirement from international cricket with immediate effect, bringing down the curtains on a glorious career spanning 16 years. 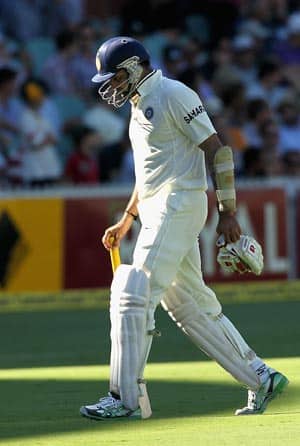 Board of Control for Cricket in India (BCCI) President N Srinivasan paid his tribute to the retiring batting legend in a statement.

“Not many batsmen made batting look as easy as VVS Laxman. He was an exceptional cricketer, who excelled in pressure situations. The classic innings that he essayed in crisis situations shaped the history of Indian cricket, none more so than the 281 against Australia at Kolkata in March 2001,” Srinivasan was quoted as saying by BCCI s official website.

India batsman VVS Laxman, on Saturday announced his retirement from international cricket with immediate effect, bringing down the curtains on a glorious career spanning 16 years.

The 37-year-old Laxman, one of the finest batsmen in contemporary cricket, said that he felt it was the right time to bid adieu to the game which he played with “great pride for the country”.

“I would like to announce my retirement from international cricket with immediate effect. I think it’s right time to move on”, an emotional Laxman told a press conference in Hyderabad.

Laxman, who was picked in the Indian squad for the two-match Test series against New Zealand beginning in Hyderabad from August 23, surprisingly chose to hang his boots with immediate effect without taking the opportunity to bow out of international cricket in front of his home crowd.

“If a cricketer s greatness is to be measured in terms of his performances against the best opposition of his time, then Laxman stands right at the top. His record against Australia, the world s no. 1 team for the better part of his career, speaks for itself,” he added.

“Indian cricket-lovers, and the game of cricket itself, will miss him for the elegance and grace that he epitomised, on and off the field. On behalf of the BCCI, I would like to wish VVS Laxman all the best for the future,” Srinivasan concluded.