Former India cricketer VVS Laxman announced the launch of his second cricket academy, with two more being planned by next summer.

Hyderabad: Former India cricketer VVS Laxman today announced the launch of his second cricket academy, and two more are planned to be opened by next summer. The second academy will be located at the Delhi Public School, Nacharam. The training session at the academy would begin with the start of summer camp from April 3, Laxman told reporters. The first academy at Srinidhi school in the city has been going on with about 90 trainees, said the right-handed batsman. FULL CRICKET SCORECARD: India vs Australia, 2nd Test

Laxman said two more institutions are planned to be launched in different parts of the city by summer of next year to reduce travel time for children. Coming to the ongoing Border-Gavaskar Trophy, Laxman felt that the series is far from over. He maintains that a four-Test series is to India s advantage. “There is plenty of time to bounce back from the Pune defeat, and especially given the quality that is at Virat s disposal. It is debatable if there will be a Pune-type pitch for the rest of the series, and I strongly advocate that there should not be, because a surface of that nature pretty much balances out the gulf between the sides.”

He further added that, “While Pune cannot be wished away as a bad dream, India can use it as a template of what not to do. And emerge stronger by imbibing the lessons. Not for a moment do I have any doubt about my Indian team s capability to win this series even from this position.” 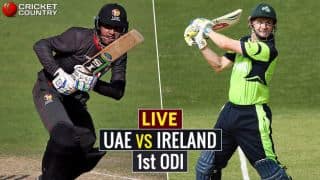