VVS Laxman drew comparisons with how things are done in places like England, where all the county players are given a contract.

Former Indian cricketer and the current mentor of Sunrisers Hyderabad (SRH) VVS Laxman agreed with Ravi Shastri regarding the pay structure of the Indian team. He also echoed Ravichandran Ashwin s views about domestic players having contracts. Shastri in fact referred to the amounts received by the Indian cricketers as peanuts . Laxman drew comparisons with how things are done in places like England, where all the county players are given a contract. He also spoke about having given a presentation to the Hyderabad Cricket Association (HCA) a few years back regarding this. Laxman,a veteran of 134 Tests and 86 One-Day Internationals (ODI), is part of the backroom staff with SRH, which also consists of Tom Moody and Muttiah Muralitharan. READ: IPL 2017: Kane Williamson a terrific role model, SRH fortunate to have him, says VVS Laxman

Stressing on the importance of giving a contract to a domestic player, Laxman said, “I had given the proposal to HCA six-seven years back. Every time a new regime comes [in state association], I give a presentation on how to improve the quality of cricket and also how to look after the players. In England, counties have contracts and the domestic players benefit a lot due to that. I also had a contract with Lancashire, according to cricbuzz.com.

“The contracts are very very important nowadays because jobs are not easily available for domestic cricketers as it used to be 10 years back. The contract system is an incentive for the parents as well. It is like `if my son is part of the Ranji team, he gets some fixed sum regardless of his final place in the team’. Domestic players should also get more money,” he added. READ: IPL 2017: Sachin Tendulkar, Sourav Ganguly, Virender Sehwag, VVS Laxman felicitated

Laxman however remains confident that the BCCI is looking into this issue. “When you play international cricket, you have to be rewarded well. We can take a leaf out of Australia and England in this regard. They get good contracts. Of course, the pay structure in India is much better than before. For the Indians, it is a work in progress. And I am sure the board is looking into it. After all, players are a vital component of the game,” the SRH mentor said. 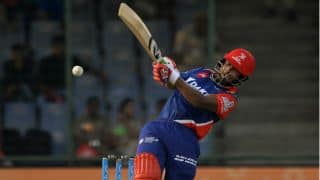 IPL 2017: Rishabh Pant terms half-century against Royal Challengers Bangalore (RCB) as "emotionally the most difficult knock" of his life