Former Test batsman VVS Laxman was effusive in his praise for India captain MS Dhoni, who lead the national team to back-to-back title triumphs at the ICC Champions Trophy 2013 in England and Caribbean tri-nation series in the West Indies. 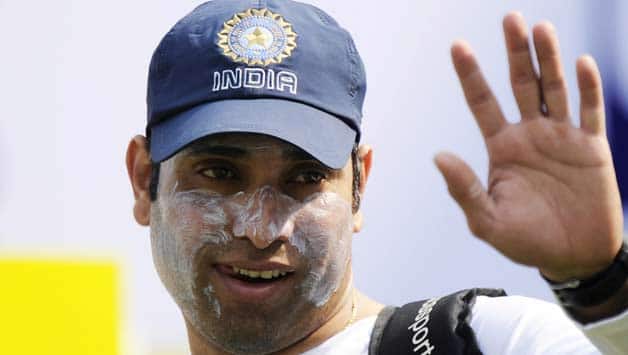 Former Test batsman VVS Laxman was effusive in his praise for India captain MS Dhoni, who lead the national team to back-to-back title triumphs at the ICC Champions Trophy 2013 in England and Caribbean tri-nation series in the West Indies.

“His records [of winning all the world titles] speak for himself. He has that uniqueness to respond to a tough situation with ease. He does not involve himself much emotionally, and that’s his quality. India are lucky to have a captain like Dhoni,” Laxman said on the sidelines of a function in Kolkata.

The 38-year-old batsman, who had announced his retirement from International cricket in August last year, however, refused to draw comparisons between Dhoni and former India captain Sourav Ganguly.

Ravindra Jadeja‘s emergence as an all-rounder and Shikhar Dhawan‘s batting prowess at the top have been two positives for Indian cricket and Laxman feels it’s Dhoni who should be credited for finding a talent like Jadeja.

“Dhoni backed him well especially using Jadeja as a bowler. He is also a great fielder and a handy batsman. Jadeja has emerged as a great asset to the Indian team and Dhoni should be complemented,” he said.

Talking about Dhawan, Laxman said: “I mentored him during his stint at Sunrisers Hyderabad. He always had the talent and his change in approach is working well for him.”

Laxman said India, the defending champions and world number one ODI side, are going in the right direction ahead of the ICC World Cup 2015.

“The manner in which we beat England in England [in the Champions Trophy last month] was really commendable. The youngsters should also be credited for the performance. It’s a side that’s going in the right direction ahead of the World Cup 2015,” he said.

Talking about India’s triumph in the recently-concluded tri-nation series in the West Indies, Laxman said: “He once again stayed composed yet on the top of his game. I really appreciate the way he’s instilling confidence among the young players. The credit goes to Dhoni and his team.”

Laxman also hoped that Sachin Tendulkar would do well in South Africa which is seen as the senior most India batsman’s swansong series.

Recalling India’s last [2010-11] tour to South Africa where Tendulkar notched two hundreds in Centurion and Cape Town, Laxman said: “I’m sure he would go there with a fine memory of his two hundreds.”

“I’m sure he would have a fantastic series this time around as well,” said the stylish Hyderabadi batsman, who was awarded the Padma Shri award in 2011.

Wishing India all the best for the South Africa tour, Laxman said: “India would go there with the confidence of beating Australia 4-0. But an overseas win gives you the real confidence and it teaches you a lot. I’m sure they would do well.”

Laxman further hailed the BCCI‘s initiative for an India A tour in South Africa next month ahead of the November-January series.

“It’s a great initiative as it would help the youngsters get some vital experience ahead of the real series,” he said.