VVS Laxman lauded India s record 246-run victory over England in the second Test at Dr YS Rajasekhara Reddy ACA-VDCA Cricket Stadium, Visakhapatnam as an excellent team effort . India had held England to a draw in the first Test at Rajkot, but were all over the tourists in the second Test. When England started Day Five they had to score another 318 runs with 8 wickets standing or bat through the day; they achieved neither, and folded for 158 a mere 27 balls after lunch, the three Indian spinners Ravichandran Ashwin, Ravindra Jadeja and debutant Jayant Yadav sharing 8 wickets between them. Full Cricket Scorecard: India vs England 2nd Test at Visakhapatnam

Laxman, Chief Cricket Mentor of CricketCountry, praised the excellent batting effort from Cheteshwar Pujara and Virat Kohli in the first innings (India s first-innings 455 was built around Pujara s 119 and Kohli s 167): It is always crucial that you win the toss in India, he said, but the batsmen still had to get the runs, and that was where Pujara and Virat both stood up. Laxman also emphasised on the fact that the English spinners Moeen Ali (though he took 3 wickets), Adil Rashid and Zafar Ansari were largely ineffective in the first innings, which meant that James Anderson and Stuart Broad had to burden most of the workload.

Laxman hailed Kohli s second-innings 81 under conditions where no other Indian batsman got going. The innings truly showed his class, he added, while mentioning how crucial the last-wicket partnership of 42 between Jayant and Mohammed Shami was: The partnership shifted the momentum towards India after England had seized the initiative, reducing them to 162 for 9.

Laxman also praised the brilliant bowling effort from all five men: The pitch was not exactly a rank turner, and while it was difficult to bat on, the bowlers had to be patient. This is where the spinners came on top, and it helped that the fast bowlers, Umesh [Yadav] and Shami, provided crucial breakthroughs. The wickets were shared by the five bowlers, which gave Virat the option to rotate his men. Laxman specifically emphasised on Shami s ability to provide wickets at regular intervals. Shami dismissed Alastair Cook in the first innings with a peach, and Joe Root and Rashid in the second.

Laxman was particularly impressed by the temperament of debutant Jayant, who scored 35 and 27 not out and had match figures of 4 for 68: I liked the way he farmed the strike in the second-innings last-wicket partnership, in which he kept Shami away from the fast bowlers. Not only does has an excellent temperament, but he also has the heart to face the fast bowlers when needed. He did not get a lot of overs with Ashwin and Jadeja operating, but he bowled well whenever he came on. The ball that got Ben Stokes in fourth innings was brilliant. I think with time he will. 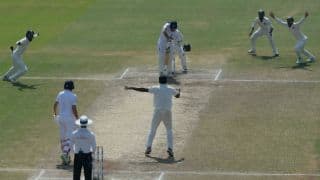