Former India cricketer VVS Laxman has revealed a few secrets of facing spin duo of Ravichandran Ashwin and Ravindra Jadeja, who have terrorised batsmen all over.

Former India cricketer VVS Laxman has revealed a few secrets of facing spin duo of Ravichandran Ashwin and Ravindra Jadeja, who have terrorised batsmen all over. Ashwin and Jadeja have been vital cogs in the Indian Test side, which has roared to the No. 1 spot in ICC Test rankings. India have gone unbeaten in their last 17 Tests, and a huge chunk of credit goes to the pair or Ashwin and Jadeja who have won them several games home as well as away. Laxman s tips, in this regards, can come in handy for players who face difficulties against the Indian spinners.

Laxman told CricketCountry, “I have always enjoyed playing against quality spinners, irrespective of whether the wicket is helping them or not. Quality spinners do not require any help from the wicket. Quality spinners are so skillful, where they deceive the batsman in the flight. Two best spinners I played against were Murali and Warne. Irrespective of the conditions, they always troubled the batsman. Ashwin, especially, has a lot of variations and he knows when to use them. Jadeja is different to Ashwin because he bowls at a quicker pace. His strength is his consistency, especially with his line. He bowls very straight. Some balls turn and some don’t. That’s why the batsman is always in double mind. Batsman doesn’t know which one turns and which one doesn’t. Because there is no changes in the action or grip.”

The former cricketer said playing Ashwin and Jadeja as late as possible could be a successful tactic. “From personal point of view, I would play them as late as possible. That is very important when you are playing turning tracks. Because if you commit to the shot, they you will face problems. Very important to play late and with soft hands. Batsman who fall in trouble is the one who goes hard at the ball. If you are playing with soft hands, the ball won’t carry to the close-in fielders,” he said.

He added, “For Jadeja, I would not step out. He bowls at a quicker pace. He bowls at a flatter trajectory. It is very difficult to judge which ball will turn and which won’t. I would play from my crease and also never take my leg across. If you do so, you become a big lbw candidate. Even if you take long stride forward, umpire would give out.”

Laxman, who played 134 Tests and 86 ODIs, went on to provide a few more critical points for batsmen facing the Indian spin duo, “I would not play inside the line and not outside the line. And I’d take my legs straight and always look to play straight in the V, instead of playing towards the cover. Usually you can do to other left-arm spinners. Play as late as possible. Play with soft hands. And look to disturb bowler’s rhythm. Then, they won’t make your life miserable.” 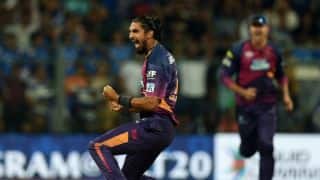 Ishant Sharma, Kevin Pietersen and Saurabh Tiwary to be released by Rising Pune Supergiants before IPL 2017