VVS Laxman's NGO VVS Foundation, which helps underprivileged children in areas of education and sports coaching, would be officially launched on May 5.

Hyderabad: Veteran cricketer VVS Laxman‘s NGO VVS Foundation, which helps underprivileged children in areas of education and sports coaching, would be officially launched on May 5. Cricketers David Warner, Yuvraj Singh and other prominent personalities will be present for the launch. The foundation has been in existence for the last two years and it is currently supporting 90 children and four IIT students, Laxman told reporters on Friday. A ‘black tie-dinner’ (fund raiser) would be organised on May 5, he said. “The whole idea of this launch and fund-raiser on May 5 is to build a corpus and to support more [children],” he said. Indian cricket s fab five to be felicitated at IPL 2017 opening ceremony

There will be two panel discussions on May 5 on the themes Future of Sports coaching in India and Power of Dreams. The discussion on Future of Sports coaching in India , to be moderated by cricket commentator and writer Harsha Bhogle, would be participated by Yuvraj Singh, David Warner and Pullela Gopichand. The second debate on Power of Dreams would be attended by Telangana IT minister KT Rama Rao and south Indian actress Samantha. Earlier, The IPL Governing Council today decided to felicitate five legends Sachin Tendulkar, Sourav Ganguly, Rahul Dravid, VVS Laxman and Virender Sehwag, during the opening ceremony of cash-rich league.

The decision was taken at the GC meeting today that five legends of Indian cricket Sachin Tendulkar, Sourav Ganguly, Rahul Dravid, VVS Laxman and Virender Sehwag will be felicitated during the opening ceremony in Hyderabad on April 5, IPL chairman Rajeev Shukla told reporters after the completion of IPL GC meet. 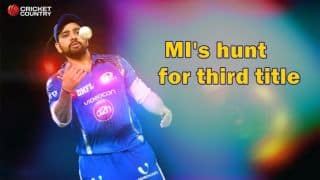 Mumbai Indians in IPL 2017, Preview: Rohit Sharma-led side on hunt for 3rd title