VVS Laxman send his best wishes for Team India as they get set to take on Sri Lanka.

Former Indian batsman, VVS Laxman send his best wishes for Team India as they get set to take on neighbours and South-Asian giants, Sri Lanka in a three-match Test series starting Wednesday at the Galle International Stadium in Galle. Laxman has appeared for 13 Test matches for India against the neighbouring island nation. India’s last overseas Test win came only at Lord’s in 2014, and under the aggressive new leadership of Virat Kohli, India will look to finally set the record straight. Given that their last series win in Sri Lanka came 22 years ago, there will be an added incentive for India. Sri Lanka, meanwhile, have been in poor form, losing badly to Pakistan less than a month ago. Sunil Gavaskar prefers Virat Kohli over Rohit Sharma at no.3 in Tests

Good luck to Team India in the upcoming test series against SL.I am sure they will play to their potential and will win the series. #INDvSL

India’s young Test side has come together quite well despite a lack of results recently. Murali Vijay has been solid at the top, and his injury will be a huge blow to India. That said, KL Rahul scored a century in his last Test and looked especially well in the practice match so India do have a like-for-like replacement. Shikhar Dhawan too has been in great form, and he will look to finally put to an end the doubts surrounding his presence in Tests. Virat Kohli excited to lead India in first full Test series

With Rohit Sharma confirmed to bat at No. 3 for India, he has the chance to vindicate Kohli’s faith in him. Given India’s track record of backing Rohit, it is likely that even if he fails he will retain his No. 3 slot till the end of the series. Kohli himself has been short of runs this year, despite having a phenomenal series in Australia in 2014-15. He will want to go back to scoring consistent runs. Indian squad to Sri Lanka has only 4 players who have played against Sri Lanka before 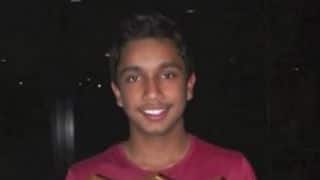 An Indian cricketer debuts for Australian Under-19!