Sachin Tendulkar is all set to return to the Test arena after a break of two months but all eyes will be on another veteran VVS Laxman's future when selectors pick the squad on Friday for the two-match series against New Zealand starting August 23. 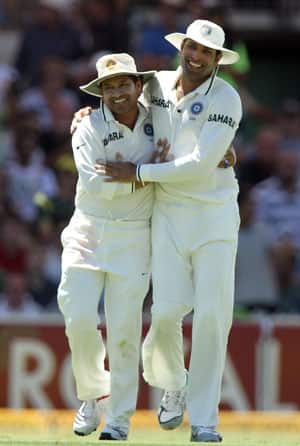 According to reports, Sachin Tendulkar (L) is all set to return to the Test arena but the most interesting part of Friday’s meeting will certainly be selection committee’s stance on VVS Laxman’s future. Getty Images

Sachin Tendulkar is all set to return to the Test arena after a break of two months but all eyes will be on another veteran VVS Laxman’s future when selectors pick the squad on Friday for the two-match series against New Zealand starting August 23.

The selectors will also pick the final squad for the World Twenty20 Championship in Sri Lanka in September and Yuvraj Singh, who is training at the NCA after recovering from a rare germ cell cancer, is in contention for a spot.

“It will depend on the fitness certificate that he will get from the NCA,” a selection committee source told PTI.

The first Test against New Zealand will be held in southern Indian city of Hyderabad while the second match will be played at southern city of Bangalore from August 31.

“There are two schools of thought on Laxman. One is that we should groom a youngster before the series against England, while the other wants to give Laxman a chance to play at home,” the source said.

Incidentally, this will be India’s first Test series after their 0-4 drubbing during at the hands of Australia, earlier this year.

Tendulkar, who decided to take a break from the recently concluded limited overs series in Sri Lanka, will be fresh and raring to have a go at the New Zealanders, who had a forgettable Test series against the West Indies.

The series will also be important as it will be the start of Team India’s journey without a man responding to the name of Rahul Dravid.

Talented India A captain Cheteshwar Pujara, who has long been touted as Dravid’s ideal replacement, is likely to get a long rope to prove his worth in Test cricket.

Rohit Sharma’s string of failures and Pujara’s impressive show for India A in West Indies makes the latter’s case stronger.

Irfan Pathan, after his good all-round show in Sri Lanka, may be inducted in the squad of 15 as an all-rounder but he may not readily get a chance in the playing XI.

Off-spinner Ravichandran Ashwin and left-arm spinner Pragyan Ojha, in all likelihood, will complete the first XI.

It will be interesting to see whether senior off-spinner Harbhajan Singh gets a look in although on current form, it will be very difficult.

He has played three first-class county matches so far for Essex taking only two wickets. The first match against Gloucestershire was a wash-out where he got to bowl only 14 overs. Against Hampshire, he bowled 30.3 overs taking 1/76 in the process.

Against Leicestershire, he had figures of 1/96 from 37 overs. Statistically, he may not figure in the list but one can never discount his match-winning performances on Indian pitches.

In case, Harbhajan is overlooked once again, Rahul Sharma will make it in the squad as the third frontline spinner given that there are very few other options.

The 15th and last place would have multiple contenders.

Rohit may be down on form but his sheer talent will still keep him in contention.

With no quality fast bowlers in Black Caps rank and matches supposed to be held on slow tracks of Uppal and Chinnaswamy Stadiums, Suresh Raina’s chances cannot also be ruled out as he can also bowl off-breaks.

Manoj Tiwary also has a case after making full use of whatever opportunities he has been handed but he is certainly behind Rohit and Raina in this race for the final spot in the squad.

Pujara has played three Test matches in 2010 with the highlight being a 72 against Australia in Bangalore in India’s successful run chase.

The most interesting part of Friday s meeting will certainly be selection committee’s stance on Laxman’s future.

Speculation is rife as to whether the first Test at Hyderabad could be his swansong after having had a dismal tour of Australia, where he managed a meagre 155 runs from eight innings at an average of less than 20.

His fitness and running between the wickets have also come under the scanner time and again.

Nearing 38, the ‘Very Very Special’ man of Indian cricket is not getting any younger.

The only thing that might force the selectors to persist with Laxman for the next 10 Test matches at home is his experience. With no Dravid, the exit of Laxman would mean that Tendulkar will be the only vastly experienced batsman in the Indian middle-order.

Virat Kohli has already established himself after his impressive show against Australia Down Under and Ajinkya Rahane will come in as the reserve opener after Virender Sehwag and Gautam Gambhir.

Sehwag, Gambhir, Kohli, Tendulkar, Laxman, Pujara and Dhoni, in all likelihood, will be the seven batsmen while Zaheer Khan, Umesh Yadav are likely to operate with the new ball. Gangling pacer Ishant Sharma is also in contention provided he is declared fit.

The other question marks will be on Sehwag and Zaheer’s fitness as they had to come back home before the one-off Twenty20 against Sri Lanka. Hopefully, with two weeks left for the New Zealand series, they would recover in time for Tests. (PTI)

Australia slips to its lowest position in ODI championships