Wankhede Stadium likely to be sponsored by DDB Mudra Group

Wankhede Stadium likely to be sponsored by DDB Mudra Group

The historic Wankhede Stadium in Mumbai, which saw India's historic triumph in he ICC Cricket World Cup 2011, is likely to be renamed, and sponsored by DDB Mudra Group.

The historic Wankhede Stadium in Mumbai, which saw India’s historic triumph in he ICC Cricket World Cup 2011, is likely to be renamed. The stadium, which was built and named after SK Wankhede, will although retain it’s original name, except for a sponsor name to be added in it, as Mumbai Cricket Association (MCA) is in talks with DDB Mudra Group, an advertising firm, and a deal is likely to be struck soon between the two, in the near future. “Yes, we’re in talks to brand the stadium, which might have a sponsor’s name ‘prefixed’ or ‘suffixed’ to it. We expect a sharp fall in revenues allocated to state associations once the Lodha reforms are implemented, since the pie has to be shared by the NorthEast states too. We’ve to do something to generate funds,” an MCA official was quoted saying by Times of India.

“Saheb [MCA president Sharad Pawar] has formed an ad-hoc committee for this purpose, which includes all the office-bearers, the marketing committee chairman (Navin Shetty), and the CEO of the MCA (CS Naik). This committee will explore DDB Mudra Group’s proposal. It met them on Wednesday, and will meet them on Monday too,” a source added.

Meanwhile, Aneil Deepak, DDB Mudra Group’s Executive Director has written a letter to Pawar, explaining the situation. “Naming rights is one avenue where cricket associations can generate large revenues. It’s a financial transaction and form of advertising whereby a corporation or other entity purchases the rights to name a facility or an event, for a specific period. A presenting sponsor attaches the name of the corporation or brand at the start or end of a generic, usually traditional name,” wrote Deepak.

“There are a number of stadiums the world over that are named after brands. Stadiums have been named after brands in the US, Australia, Japan, China, Finland, Canada, Israel and Germany, where eight of the ten largest football stadiums have their naming rights sold to corporate sponsors. The practice is widening in the UK’ for instance the current stadium of Bolton Wanderers is known as the Macron Stadium, and that of the Arsenal Football Club stadium is the Emirates Stadium. In cricket, the most famous example is The Oval, home of Surrey. It has had several sponsors over the years, and is currently known as the Kia Oval,” he added.

“The sponsor shall have the exclusive right to use the naming rights references in all public relations and marketing materials. The MCA will have to make all efforts to cause all media and third parties in contact with the stadium to use the new name,” Deepak concluded. 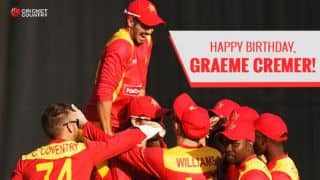