India Women are just a step away from glory as they take on England in the final of ICC Women s World Cup 2017 at Lord s. Tushar Arothe became India Women s head coach 2 months before the World Cup. His first assignment being the quadrangular series in South Africa was a successful one as India won it in style. Before reaching the summit clash, to be played at Lord s, Harmanpreet Kaur brushed aside Australia with a 171-run knock in the semi-finals. She not only broke several records but also found a special place in the hearts of many. As Mithali Raj and co. prepares to face a jam-packed Lord s, Arothe wishes to fulfil his dream too to watch Mithali lift the World Cup trophy from the Lord s balcony. ICC Women’s World Cup final: Mithali Raj predicts plenty of runs at Lord’s

Arothe recollects the moments before World Cup when he interacted with the team in the dressing room, I asked my team, Why are we taking this flight? Few were quick to respond, To win the World Cup. I heard that, I saw the group and I said the meeting was over. The team had belief and a clear target. There wasn t much to say, Arothe told the Sunday Express. As India rode on Harmanpreet s 171* knock to their second final of the World Cup, Arothe mentioned about the crazy scenes after entering Lord s, They all started cheering as we passed Lord s. The final was two days away but it seems they couldn t wait to be out there on the ground. A majority of them had never gone inside till that day. These are what dreams are made of.

When asked how Arothe motivated the girls, it was Swami Vivekanand and Martin Luther King speeches that inspired the Indian Eves, These are all small, small things that are very effective. That is what a coach should understand. This can t be an overnight transformation. I would make the girls listen to speeches of Martin Luther King and Swami Vivekanand. I would have one-on-one discussions and talk to small groups.

If you are wondering how Mithali was calmly seen reading Rumi and Nasser Hussain s book at the stands, it was Arothe s idea to do so. Infact, he even suggested the girls to read the book on Madonna, I picked up this book on Madonna, it s about her music and life. That s also being read with interest. There is one with inspiring short stories, even that has been exchanged a lot.

To inspire the women further, Arothe could not have found a better inspirational cricketer than MS Dhoni. He showed them Dhoni s knock in the final against Sri Lanka in 2011 and expects that the Indian Eves could replicate the same on Sunday. And talking about why it is his dream to watch India lift the World Cup from the Lord s balcony, Arothe concluded, In 1983, we all kept awake late in the night to see Kapil Dev lift the Cup from the Lord s balcony. I have been to Lord s but never to that balcony. 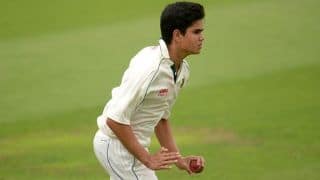