Waqar Younis has stopped Mohammad Aamer from appearing in the fresh round of domestic cricket in order to personally oversee his progress.

Karachi: Keeping a close watch on Mohammad Aamer‘s possible return to international cricket, Pakistan head coach Waqar Younis has stopped the left-arm pacer from appearing in the fresh round of domestic cricket in order to personally oversee his progress. Aamer was told to reach Lahore to attend the short conditioning camp beginning from tomorrow instead of going to Karachi to play the latest super eight round of the Quaid-e-Azam Trophy First-Class tournament. “The Pakistan cricket board allowed all the other players named for the camp to represent their teams in this round only Aamer has been held back. We wrote a letter seeking a reason for holding him back and were told Waqar wants to spend time with him,” the manager of the Sui Southern Gas team for whom Aamer plays said. READ: Waqar Younis says Mohammad Aamer deserves international recall

Ironically all the other top players including Misbah-ul-Haq, Azhar Ali, Muhammad Hafeez, Umar Akmal, Muhammad Rizwan, Yasir Shah, Wahab Riaz etc have been allowed to represent their teams in Karachi in matches that began on Sunday. Aamer along with the two other tainted players Salman Butt and Muhammad Asif and a host of other national players returned from Qatar on Saturday after playing in a festival match in Doha.

The PCB had granted permission to the players to play in the festival match to celebrate the national day of Qatar. “Waqar wants to watch Aamer closely and check his fitness and attitude. He wants to have one to one talk sessions with him to be sure that the youngster is now sincerely repentant for his deeds and is ready to be given another chance to play for Pakistan,” a national selector said. “That is why he has told Aamer to attend the camp. The idea is also that he will get time with Aamer and be prepared to handle the situation when the other senior players also join the camp in Lahore,” he said. ALSO READ: Mohammad Aamer vows to do his country justice on comeback

Aamer, Butt and Asif all served five-year bans and varying jail terms in the United Kingdom for spot fixing from 2010 to 2015. Their bans expired in September this year after which they were eligible to resume playing cricket. A reliable source in the PCB said that Waqar and the selectors wanted Aamer in the ODI and T20 squads for the tour to New Zealand next month but remained apprehensive about the reaction of some players to recalling Aamer to the national squad.

“Assistant coach Mushtaq Ahmed has been given the task of talking to the main players while Aamer is in Lahore and convincing them to accept the youngster back in the dressing room,” the source said. “They are still some players notably Muhammad Hafeez and Azhar Ali who are not comfortable with the idea of having Aamer in the team. In fact Hafeez has made it a point he will not play in the franchise which chooses Aamer for the Pakistan super league this week,” he added. 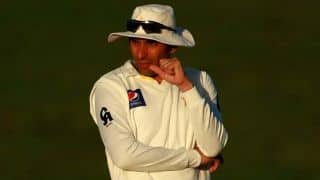