Unlike the sport's other major players, Afghanistan was never a colony of the British Empire.

Cricket-mad Afghanistan was euphoric after being awarded Test match status, a rare glimmer of good news amid rising insecurity, though many lamented the lack of sports infrastructure in the conflict-torn country. Both Ireland and Afghanistan became cricket’s 11th and 12th Test nations on Thursday following a unanimous vote by the International Cricket Council during its annual meeting in London.

“This achievement was a dream for Afghanistan and we have been yearning for this status,” said Afghanistan Cricket Board chairman Atif Mashal, hailing it as a “historic achievement. We have been granted the full membership and the Test status, and I congratulate this news to the cricket board, and to the entire Afghan nation.”

Afghan cricket has made rapid strides since the fall of the Taliban in late 2001, with the country’s premier leg-spinner Rashid Khan making waves in T20 leagues including Indian Premier League this year. The successes have brought much-needed cheer in a country beset by a wrenching conflict that has resulted in a record number of civilian casualties. “For a nation like Afghanistan it is a huge and remarkable achievement, the entire nation will be celebrating,” said Afghanistan Cricket Board chief executive Shafiq Stanikzai. “Afghanistan… dared to dream that this would happen and today it has become a reality.”

But many fans rued the lack of infrastructure — and security — to host international matches. “Afghanistan does not have many cricket grounds that meet international standards and most importantly security to host games,” said 24-year-old Kabul resident Mohammad Daud. “It’s a shame that we have got Test status but don’t have the infrastructure to match.”

Last year, Afghanistan’s national team shifted its base from Sharjah in United Arab Emirates to Noida, Delhi, while India’s former batsman Lalchand Rajput replaced Pakistan’s Inzamam-ul-Haq as team coach. There are also questions about how well Afghanistan will do in the game’s longest format.

Unlike the sport’s other major players, Afghanistan was never a colony of the British Empire. Instead many Afghans’ first contact with the sport took place during the 1980s and 1990s, as refugees who had fled to Pakistan to escape the Soviet invasion.

Cricket struggled under the hardline Islamist Taliban, who viewed sports as a distraction from religious duties — and famously shaved the heads of a visiting Pakistani football team as punishment for wearing shorts. But it has become hugely popular in the country since the regime was toppled in a US-led invasion in 2001. 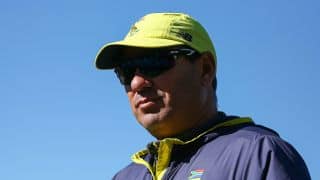