In what could be a big boost for the star-bereft Twenty20 Big Bash, former Australian spin legend Shane Warne has said he might consider playing in the inaugural edition of the league. 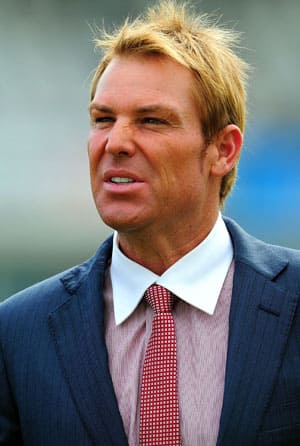 In what could be a big boost for the star-bereft Twenty20 Big Bash, former Australian spin legend Shane Warne has said he might consider playing in the inaugural edition of the league.

“There is probably a possibility that I might play. I might be involved in some level on the T20, but I’m sort of mulling over all those things at the moment with some business opportunities and some sponsorships as well,” said Warne.

The spin wizard, who was last seen in action for Rajasthan Royals during the fourth edition of the Indian Premier League (IPL) earlier this year, said he was “weighing up” offers from three teams in the revamped Big Bash but stressed that his primary concern were his children.

“Being divorced with the children and juggling schedules its difficult to give timewise,” revealed Warne.

The 41-year-old is currently engaged with some young Australian spinners, teaching them the tricks of the trade.

Warne also insisted that he has “not changed one bit” and attributed his new look to a combination of diet and exercise.

A magazine had earlier claimed that the tweaker had a plastic surgery to get leaner look.

Warne asked: “What is my crime? I’m happy, fitter, and happier than at any stage in my life.”

He said he had dropped a few kilos and currently weighs 78kg. He revealed that his normal playing weight was about 84kg, but he swelled to 92kg while recovering from injuries. Warne said though he loved his country he had been harassed when living here.

The veteran complained about the “disappointing reports” in Australia of his weight loss and his relationship with British actress and model Liz Hurley, bemoaning “incorrect reporting” and doctoring of pictures.

Warne also negated he was about to marry Hurley saying, “When and if it comes, I’ll let you know.” (PTI)