Rajasthan Royals skipper Shane Warne held his batsmen responsible for the team's embarrassing loss against Kolkata Knight Riders and said they had put up a kid's display with some "dumb" shots to be bundled out for a paltry at the Eden Gardens on Sunday. 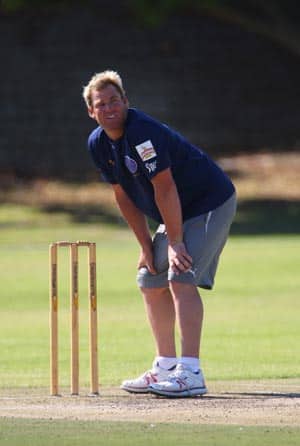 Warne flet his team played like kids against KKR

Rajasthan Royals skipper Shane Warne held his batsmen responsible for the team’s embarrassing loss against Kolkata Knight Riders and said they had put up a kid’s display with some “dumb” shots to be bundled out for a paltry at the Eden Gardens on Sunday.

After today’s eight wicket, Rajasthan had suffered two consecutive losses to Knight Riders in the ongoing Indian Premier League in a space of three days.

But Warne, who had inspired the side to title in the inaugural season of the tournament, warned his opponents not to write them off as yet.

“Our guys played some pretty dumb shots. They played kid’s cricket. That was pretty disappointing,” he said at the post-match press conference.

That was pretty weak, that was soft, that was embarrasing,” Warne said.

Warne, who is also the coach of the side, said Rajasthan have produced some of the fine talents in IPL.

“Look at young (Ravindra) Jadeja, look at (Aaron) Finch, (Yusuf) Pathan, (Paul) Valthaty, (Munaf) Patel…These are a lot of guys that played for Rajasthan Royals and have gone on and playing fantastic cricket.

“We have two or three players who have been playing for us for three years. It’s time for them to stand up and keep pushing. In cricket, it’s performance based game.

Unfortunately, if they don’t perform we will be looking to somebody else,” he said.

“It was a pretty ordinary wicket. It did not produce good cricket. If it was easy to bat on, they would have got the target in six or seven overs. But it took them about 14 overs.

It was a half decent wicket. It was so slow.

“But we didnt get enough runs. That’s probably where we went wrong,” he said.

“We have got three games in five days with two away and one at home. It’s not an ideal condition. IPL is a tough competition.”

Warne further said they missed Rahul Dravid, who missed today’s match due to a muscle strain.