Warriors found a timely hero in Ashwell Prince who blazed his way to a 55-ball 74 to help his side upset Royal Challengers Bangalore in a last-ball thriller in the Champions League Twenty20 tournament here on Friday. 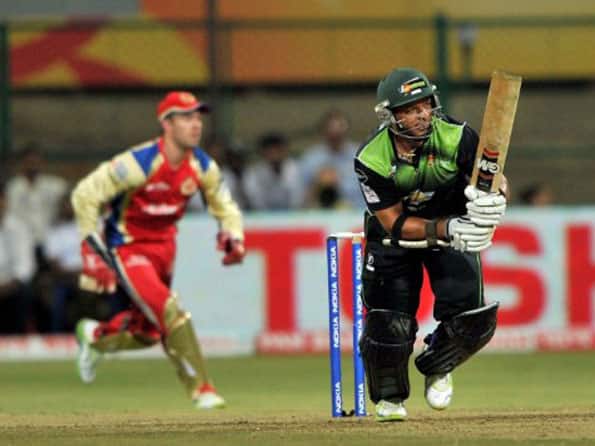 Warriors found a timely hero in Ashwell Prince who blazed his way to a 55-ball 74 to help his side upset Royal Challengers Bangalore in a last-ball thriller in the Champions League Twenty20 tournament here on Friday.

Warriors were in doldrums at 82 for four in the 12th over. But man of the match Prince, who batted with gay abandon, played a gutsy knock to steer his side to a stunning victory in front of 20,000 RCB supporters at the Chinnaswamy Stadium.

He found an able ally in skipper Johan Botha (42 from 24 balls) to produce a match-winning fifth-wicket partnership worth 73 runs in barely 39 balls.

The fortunes swung wildly as RCB fought back with the important wickets of Prince and Botha. With 13 needed off seven balls, Boje swung Abhimanyu Mithun for a cracking six over mid-wicket. But when Botha fell with Warriors needing eight runs from three balls, RCB were seemingly in charge. But Wayne Parnell, who walked into the cauldron, made light of the gripping tension, scoring the winnings runs.

Set a stiff target of 173, Warriors sneaked home in the last ball, Parnell and Boje scampering for two runs.

Warriors were definitely the better side on the park.

They bowled with vigour and verve, fielded with alacrity and batted with purpose to overcome the stiff RCB challenge.

Prince and Jon?Jon Smuts kept their side in fettle at the start of the innings, producing 38 runs in five overs. But Smut’s dismissal, caught brilliantly by Virat Kohli off S Aravind, began an exodus, though Prince dropped anchor to arrest the steady fall of wickets.

At 82 for four in the 12th over, the game seemed to be slipping out of Warriors’ grip. But Prince and Johan Botha made a fist of the chase, posting a rapid-fire stand for the fifth wicket.

Earlier, RCB had shown intent in scoring in the excess of 8.5 runs an over, despite the early loss of Mayank Agarwal.

Though not in his elements, Chris Gayle plundered runs at will off Juan Theron and Lonwabo Tsotsobe, both bleeding 14 runs in the third and fourth overs of the match. The powerful Jamaican struck two sixes and as many boundaries, raising the expectations of another run-fest.

That he wasn’t timing the ball as well as he would have liked to was apparent during his brief onslaught. One such streaky stroke, as he strove to hit Wayne Parnell over the top, resulted in skipper Botha bringing off a smart over-head catch at long-on. Gayle made 23 off 14 balls, raising 33 runs for the second wicket with Virat Kohli.

Kohli was in sublime form, playing shots to all parts of the park. With AB de Villiers also oozing with confidence and hitting the ball from the meat of the bat, runs came at a rapid pace. The confident duo had raised 52 runs for the third wicket in just 41 balls when Theron produced the much-needed breakthrough for the South African outfit.

Attempting to heave Theron over the mid-wicket fence Kohli holed out to Wayne Parnell, barely two metres from the boundary. Kohli’s enterprising 34 was embellished with four boundaries.

Villiers, who smashed two sixes during his 25-ball 31, perished in the search for quick runs, heaving Botha to Tsotsobe at long-leg.

Saurabh Tiwary also joined the party, smashing fours and sixes with casual disdain. But his pyrotechnics did not last too long as he picked Justin Kreusch at long on off left arm spinner Nicky Boje. The gutsy left-hander made 28 off 15 balls, laced with two sixes and two fours.

Despite the regular loss of wickets in the middle overs, RCB sustained the run-rate. Mohammad Kaif (26) and skipper Daniel Vettori threw their bats around while producing 28 runs for the sixth wicket.

Man Of the Match: Ashwell Prince