The player of the BBL for 2016 and 2017, Lynn struck 41-ball 93 not out against GL and stitched the highest ever opening stand in the history of IPL with Gambhir, who remained unbeaten on 48-ball 76

Lynnsanity struck Indian Premier League (IPL) in Match No. 3 at Rajkot when Kolkata Knight Riders (KKR) took on Gujarat Lions (GL). The KKR openers Gautam Gambhir and Chris Lynn made mockery of Gujarat attack and chased down 184 runs without losing a single wicket and 31 balls to spare. Lynn, who has a six-hitting reputation in Big Bash League (BBL), opened the innings and hammered 41-ball 93 not out, a knock which had 8 sixes. The player of the BBL for 2016 and 2017 also stitched the highest ever opening stand in the history of IPL with Gambhir, who remained unbeaten on 48-ball 76. IPL 2017: KKR register record win, Raina goes past Kohli and other statistical highlights

We knew we had to get to a good start (chasing 184) and we did that. We put them under pressure in the first six over and took the momentum from there, Lynn told iplt20.com. When asked if it was his night, Lynn said he always thought it was going to be his night. I knew from the beginning and now just hope to carry the same momentum and vibe throughout the tournament. It is going to be a challenge as the teams would look to work me out. But I ll throw a punch back and look to get better. It s a part of the game and will be great fun.

Lynn said sticking to the basics is key for his style of batting. I keep it simple: see ball, hit ball. If I get a good ball, I try to get to the other end. If I get a bad ball, I look to put it away. That s the main thing, he said.

Lynn also had a word of praise for his skipper and opening partner Gambhir. We gelled up really quickly. It was the second time I batted with GG [Gambhir] and we were really comfortable, running between the wickets well and having good time out there.

Lynn, who is not a regular opener and was opening the innings was only for the second time, was asked if he made certain changes to his game for opening the innings. He replied, Obviously, probably just about the bounce. Maybe as a batter you just need to keep your stance a bit low and hold your shape a little bit more. As an opener, difference is minimal but batting in the middle order needs lot more changes. Spin is definitely one thing. But opening the innings and slogging the hard ball is fun. You got to take the game as it is. I had a bit of luck my way tonight, too.

On his batting mantra, Lynn said: One ball at a time, as they say. I was just happy to get off the mark firstly and then to reach to the fifty. Tonight, the way Gauti batted, he was never going to allow me to get to the hundred. But I ll take 90 not out any day over a hundred as long as the team wins. As one says, the team comes first. 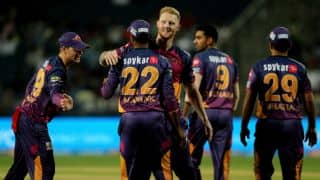