Star Indian All-Rounder Set For International Comeback, To Play For Lancashire To Get Match Fit

Star Indian All-Rounder Set For International Comeback, To Play For Lancashire To Get Match Fit

Washington Sundar picked up the injury during the Indian Premier League 2022 and was ruled out of the tournament.

New Delhi: Injuries have been a major obstacle in Washington Sundar’s career. Last year, during the India tour of England, he injured his finger and was ruled out of the tour the following T20 World Cup. He made his return in IPL 2022, for Sunrisers Hyderabad (IPL), but once again injured his hand and was ruled out of the tournament. Sundar was not selected for the five-match T20I series against South Africa and the limited-overs leg of the India tour of England 2022 as he is still not completely fit.

However, if reports are to be believed, Sundar is nearing full fitness and will play for Lancashire in County Championship to get some game time. He is currently undergoing rehab at the National Cricket Academy along with Deepak Chahar and T Natarajan. “Washington is nearing full fitness and he needs a lot of game time, which he will get only in red-ball cricket. He is going to play for Lancashire and this exposure will do him a world of good,” a BCCI source told PTI.

Meanwhile, Deepak Chahar, who picked up an injury during the home series against West Indies, and missed the IPL 2022 and the following international assignments gave a big update on his recovery. Chahar revealed that he needs four to five weeks to get match fit. “I am bowling four to five overs at one go as per my rehab programme right now. My recovery is going pretty well and I think it will take another four to five weeks for me to get match fit,” Chahar told PTI after his rehab session.

Chahar, however, ruled out the possibility of him playing in the T20I series against England. India will play three ODIs and as many T20Is after the one-off Test on the England tour. “It’s a step by step process as far as recovery is concerned. I don’t think I will be fit for England T20s. Once I am match fit, I will need to play some club level games to check my fitness,” Chahar said.

India is scheduled to play three ODIs and five T20Is between July 22 and August 7 in West Indies which could be the return series for Deepak Chahar. 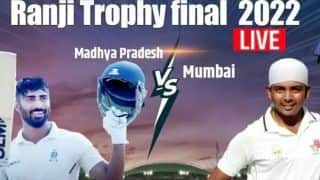