Wasim Akram gets engaged to woman from Melbourne

Wasim Akram gets engaged to woman from Melbourne

Pakistan legend Wasim Akram is engaged to marry Shaniera Thompson from Melbourne. The former left-arm fast bowler proposed to Thompson in traditional fashion by going down on one knee. 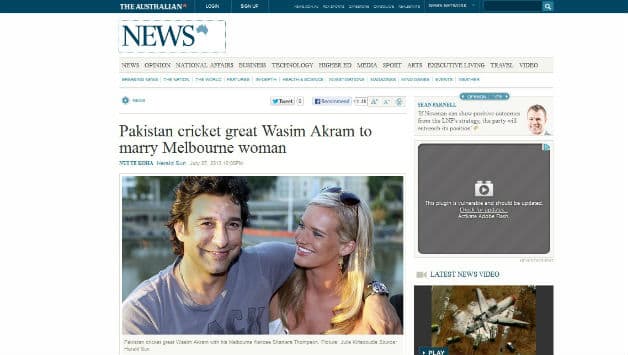 Screenshot of the website — TheAustralian.com.au — where the story was published

Pakistan legend Wasim Akram is engaged to marry Shaniera Thompson from Melbourne. The former left-arm fast bowler proposed to Thompson in traditional fashion by going down on one knee.

“It was the romantic moment of my life because it was so genuine,” said Thompson as reported by The Australian.

The 30-year-old Thompson is a former public relations consultant from Brighton. She has decided to call Pakistan her new home after having converted to Islam. She said that Akram was quite nervous before proposing in the old fashioned way.

“He was really sweet about it. He asked me what my dream proposal would be and I said I’m not the type of woman that likes a big scene. I would want it to be at home or somewhere private,” she said.

“Then I came into the lounge room and he was on his knee and asked me if I’d marry him.”

Upon witnessing the proposal, Thompson told Akram that if they were doing things the traditional way then he would have to ask her father as well. Akram then called Thompson’s father, who gave his blessing.

Akram met Thompson in Melbourne in 2011. He said, “I never thought I would get married again, but I am lucky and very happy to find love again. It just goes to show that life can give you a second chance.”

His first wife Huma died of multiple organ failure in 2009. Akram has two boys from his first marriage now aged 15 and 12.