Mohsin Khan and Aaqib Javed refused to apply for Pakistan Head Coach position as Pakistan Cricket Board had decided to elect foreign coach for national side.

Karachi: Pakistan fast bowling great Wasim Akram has lashed out at some former stalwarts who refused to apply for the head coach’s position of the national team because of his involvement in the process of shortlisting the candidates. Without taking names but in an obvious reference to former Test cricketers, Mohsin Khan and Aaqib Javed, Akram said he was disappointed to know some former players didn’t want to apply because they felt the Pakistan Cricket Board had already been advised to appoint a foreign coach by him and another former captain Ramiz Raja. “What sort of attitude and mindset is this. One former player said I will apply and talk directly to the Chairman. ALSO READ: Arthur as Pakistan coach: Interesting times lie ahead for former South Africa, Australia

When you have such a mindset how can one expect them to work well with the Pakistan team,” Akram told Geo News channel. Akram and Ramiz were appointed by the PCB to help it shortlist coaching candidates for the head coach’s position which eventually went to South African Mickey Arthur after Englishman Peter Moores and Australian Stuart Law pulled out of the race. The former fast bowler, who is now a well-known commentator, said he had always believed in giving respect to his senior players. “But even respect is a give and take thing and one expects to be respected by everyone,” Akram said.

Akram said he and Ramiz had only helped the PCB in shortlisting the candidates. He confirmed that no high profile Pakistani coach had sent his application through the given channel by the Board. Akram was clearly riled by the statements of Mohsin, who said he wouldn’t apply to his juniors or players with tainted pasts. Akram said Arthur carried a lot of coaching experience behind him and he hoped he would turn around the Pakistan team. “But one should not expect him to bring about improvement immediately as our team is currently languishing at ninth position in ODI rankings. Even he will require time to turn things around,” he said. ALSO READ: Stuart Law shows interest to manage India after rejecting PCB offer?

The former captain said it was shameful that Pakistan cricket had slipped to such a low. “It is shameful but this downslide has not happened overnight. It is a result of the fact that our domestic cricket structure has lost its competitive edge and is not producing quality players for a while now,” Akram said. Akram said Pakistan should expect a tough time when they tour England this summer. “Don’t expect them (England) to prepare flat pitches for our batsmen. The Duke ball will seam and swing on grassy pitches and it will be a real test for our batsmen to negotiate the ball,” he said.

Asked about the decision to drop opening batsman Ahmed Shehzad on disciplinary grounds from the list of probables for the national camp being set up ahead of the tour to England, Akram said he didn’t agree with this approach of selectors or the Board. “If we drop players on purely disciplinary grounds than let me tell you many of our era would not have even played for Pakistan including myself. I think if a player has a problem it is the job of the team management and captain to deal with it and get him to perform,” he said. 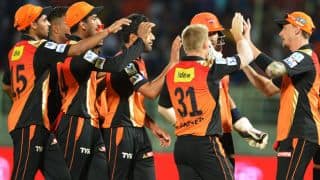