New Delhi: Cricket fans always love the banter between former Indian opener Wasim Jaffer and former England captain Michael Vaughan on Twitter. Both the stars have been indulging in banter for a while now and fans reminded them of it again when Wasim Jaffer reached England to watch a Test match between India and the home side.

Indian players have already left for the tour after the five-match T20I series against South Africa. Players like Virat Kohli and Rohit Sharma reached England during the series as they weren’t part of the team against South Africa. Apart from Virat Kohli and Rohit Sharma, R Ashwin, Ravindra Jadeja, Mohammed Shami and Jasprit Bumrah headlined the practice sessions having reached the United Kingdom on Thursday and now Wasim Jaffer has also set foot on the English soil which reminded the fans of Michael Vaughan.

He posted a photo on Twitter saying, “Sun is shining, the weather is sweet @HomeOfCricket.”

Michael Vaughan didn’t take too much time and retweeted Jaffer’s photo. He wrote, “Is it the 20th anniversary of my first Test wicket you are here for Wasim ?”

Is it the 20th anniversary of my first Test wicket you are here for Wasim ? https://t.co/7Ul5Jw62ra

Some Twitter users also asked Wasim Jaffer that has he met his friend Michael Vaughan yet. They definitely want to see both the stars together.

The Don is in England!

A cricket fan wrote on Twitter, “The Don is in England! It’s time for Michael Vaughn to go underground now! Run, Michael, Run!”

Another fan tweeted, “Like if you want to see Wasim Jaffer and Michael Vaughan together in a selfie.”

Like if you want to see Wasim Jaffer and Michael Vaughan together in a selfie.

“Have u met ur best friend Michael Vaughan yet??,” a fan asked the former Indian batsman. A user tweeted, “Someone’s leg is shaking.”

Have u met ur best friend Michael Vaughan yet?? ?

India will also play Test matches against Ireland before the Test match with England. 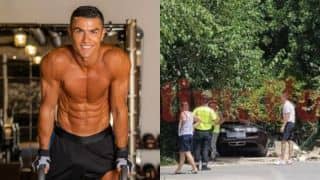