The Indian side had achieved the feat in 2006 as the Rahul Dravid-led side defeated South Africa at Johannesburg to bring up their first victory in the longest format in South Africa.

How are you all spending time at home? I’m watching India’s first-ever test win in South Africa at Jo’burg 2006-07. How good was @sreesanth36 in that test! Tough knock by @SGanguly99 in 1st inn and @VVSLaxman281, as usual, played a remarkable knock when it mattered! #nostalgic,” Jaffer tweeted.

In the match against South Africa in 2006, India won the toss and elected top bat first.

India kept on losing wickets at regular intervals, however, Sourav Ganguly played an unbeaten knock of 51 to take India’s total to 249.

It was also Ganguly’s comeback Test after his ousting from the side in 2005.

Pacer S Sreesanth then wreaked havoc on the Proteas batters and he went on to take five wickets to bundle out the hosts for just 84 in the first innings.

In the second innings, VVS Laxman played a knock of 73 runs and it helped India to set a target of 412 runs.

Then, Zaheer Khan, Sreesanth and Anil Kumble all took three wickets each to take India to a memorable 123-run win against South Africa.

However, India went on to lose the series against South Africa after coming up short in the second and third Test matches. 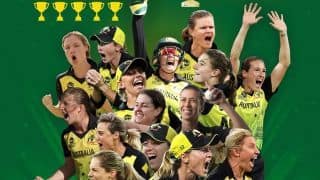