Wasim Jaffer: Youngsters should learn from Rahane, Pujara, Rohit to maintain right balance between T20 and

Veteran batsman Wasim Jaffer on Monday asked the youngsters to strike a right balance between Twenty20 cricket and the traditional formats of the game for reaping rewards.

“If you ask any cricketer, the hardest form is Test cricket because there are no short-cuts. The shorter the game gets, it gets a lot easier. That is probably one thing.

“I won’t say it’s a concern because players get rewarded financially, but at the same time they need to find the balance. They need to keep the hunger to play Test cricket,” Jaffer said here at a media conference organised by his employers, Indian Oil Corporation (IOL).

The seasoned and prolific Mumbai batsman observed that most of the younger players did not look keen to bat the entire day or bowl a lot of overs, which are essential to succeed in first class cricket, post the success of the Indian Premier League (IPL).

“A lot of youngsters are playing T20 cricket. The IPL obviously is kind of a short-cut route. When you play First-Class cricket, you play four days of hard cricket. Not many bowlers want to bowl 25 overs in a day or the batsmen probably don’t have the temperament to bat the whole day or have the patience to bat the whole day. But in IPL, the shorter the game, the easier it is,” he said.

The 35-year old, who has scored 1944 runs in 31 Tests and over 16,500 runs in first class cricket, said youngsters could learn watching players like Cheteshwar Pujara, Ajinkya Rahane and Rohit Sharma — all from IOL — who show the hunger to play for India and are willing to bat for entire day.

“One of the things that struck me about Ajinkya, Pujara and even Rohit is the hunger to play, even when they were playing U-19 cricket or Ranji Trophy. Their aim was always to play for the Indian team. That is what I feel some of the youngsters miss now. I don’t see that hunger in most of them,” he said.

“The kind of runs Pujara has scored in junior cricket or even in office cricket or Ranji Trophy, that is something a lot of youngsters can pick up; the kind of double hundreds and triple hundreds he has scored, even Ajinkya.

“That is the hunger you need in youngsters who play cricket now. And that is something which I don’t see too much in Mumbai cricket also. When we were youngsters that is what we were taught,” he added.

When pointed out that Mumbai youngsters like Prithvi Shaw and his nephew Armaan had scored over 500 and nearly 400 runs, respectively in Harris Shield, Jaffer said school cricket was different from first class games and these youngsters had a long way to go.

“There is a lot of difference between schools cricket and first class cricket. They have a long way to go. We have seen that players like Sarfaraz and Armaan were playing in Mumbai U-19 team and we haven’t qualified [for the knock out rounds]. It is a long way to go for them. School cricket is just the start,” he said.

“We need to understand that he has got the potential and he has got the quality to play at first-class level and give them sufficient chance to prove themselves. We can’t expect that in one or two innings they will score a hundred or a double hundred like it used to happen earlier,” he said. 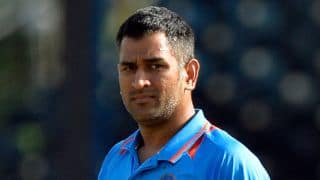