Australia were bundled for 221 in the first innings.

Things are not going the Australian way after the ball-tampering saga as well. In the ongoing fourth Test against South Africa, Pat Cummins and new captain Tim Paine have been the talking points. Paine, in particular was lauded for his fighting knock of 62 despite a hairline fracture in his right thumb. Australia entered Day Three with overnight score of 110 for 6. Paine and Cummins 99-run stand changed the course. Australia added another 111 runs to their score and were bundled for 221.

South Africa did not enforce follow on as Morne Morkel was struck with side strain just before lunch. Before lunch one could also witness Dean Elgar‘s acrobatic skills. Elgar took a miracle catch to end Australia’s innings. He dived while running towards the mid-off boundary to end Paine’s innings. Paine played a slog shot chasing quick runs as he was running out of partners at the other end.

Elgar dived full stretch as the ball appeared over his left shoulder and grasped it with both hands. 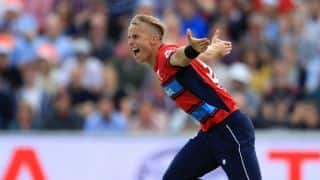