After reducing India to 174/6 on Day 2, England have set sights on a big first-innings lead.

Starting the day at 198/7, England lost Adil Rashid early in the 8th over when Jasprit Bumrah trapped him in front. However, Jos Buttler and Stuart Broad frustrated India throughout the morning session adding 98 runs for the ninth wicket.

Broad battled for 59 balls en route to making 38 before he was caught excellently in the deep by KL Rahul off Ravindra Jadeja. Buttler went on to compile a 10th Test fifty and made 89 before becoming Ravindra Jadeja s fourth victim. England ended their first innings on 332.

In reply, India lost Shikhar Dhawan to Broad after scoring just six runs. Rahul and Cheteshwar Pujara then added 64 runs for the second wicket to repair the early damage. Rahul departed to a peach of a delivery from Sam Curran on 37.

Anderson, in the middle of a fine spell, then got rid of Ajinkya Rahane when the Indian vice-captain prodded at an away going delivery to wicketkeeper Jonny Bairstow. Virat Kohli, who was looking in good nick, lost his concentration and wicket when he prodded one to the slips to depart for 49.

Rishabh Pant disappointed again as he fell for five to Stokes. Hanuma Vihari rode his luck on debut and after a nervy 20 minutes, settled to score an unbeaten 25 as India finished day two at 174/6, trailing England by 158 runs. 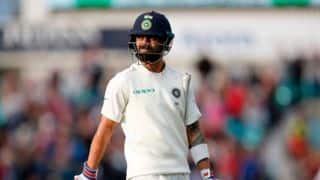