Resuming day three on 174 for six, India s Hanuma Vihari made his maiden Test fifty in his debut innings. He added 77 runs with Ravindra Jadeja for the seventh wicket before he was out for 56 to Moeen Ali.

Bumrah though departed for 0 off 14 deliveries to a run out. India were all out for 292, conceding a 40-run lead to England. Jadeja remained unbeaten on 86 as he added 32 runs for the last wicket with Bumrah.

In reply, Alastair Cook came out to bat for one last time for England. Mohammad Shami removed Keaton Jennings when he shouldered arms to an incoming delivery. Jennings wretched series with the bat thus ended in which he has tallied just 176 runs in 10 innings.

Alastair Cook though continued on in his final Test innings even as Moeen Ali was scalped by Ravindra Jadeja for 20. Cook and skipper Joe Root saw through the day to help England to 114/2, extending the lead to 154.

At the close of play, Cook was unbeaten on 46, while Joe Root had added 29. 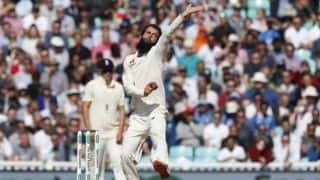