Catch all the live action of Day 4 of the first Test Match between India and South Africa.

India will be looking to post a daunting target for South Africa as they resume Day Four on 284 for two with Cheteshwar Pujara (136 not out) and Virat Kohli (77 not out) sharing an unbeaten 191 run-partnership.

South Africa were unable to overhaul India’s first innings total of 280 and conceded a 36-run lead early on the third day. In reply, Pujara rallied India and helped them build a good lead as they tighten the noose around the hosts with a lead of 320.

It was great batting as there was nothing the South Africans could do to stop Pujara. He was in a mood to dominate and extend India’s score. Consider this: in the final session, India scored 175 runs, with Pujara scoring 96 of them. That was his class and dominance on display.

Day Four will present a different challenge for both sides, but one would say that India are in total control. 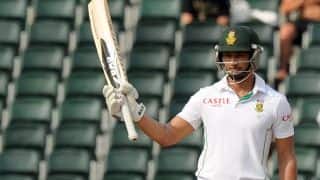